In April 2019, Canada’s profit-based selection index, Pro$, was updated to reflect current economic values and consider additional expenses and traits. Pro$ is a tool to maximize genetic response for daughter lifetime profitability and is based on actual cow cumulative profit to six years of age or disposal. By adopting lifetime profitability as its definition, value is placed on longevity and a cow’s ability to successfully survive multiple cycles of reproduction and production. However, there are additional metrics that can be explored when examining cow or herd economics, including the age at which a cow has generated sufficient revenue to pay back the debt accumulated due to the costs associated with her rearing.  This point in a cow’s lifetime can be referred to as her “breakeven age”.

Rearing a heifer to the time she calves for the first time and starts producing milk, and therefore revenue, is a significant investment. For Holsteins, the cost of raising a heifer from birth to 24 months of age is approximately $2,650. Each extra day spent before the first calving adds incremental costs, increasing her debt to be recovered, and further delays the age where revenue can first be earned.

To determine the amount of variation in breakeven age in the Canadian dairy population, daily cumulative profit was calculated for Holstein cows born in 2012 through their life span, under current costs and prices. The breakeven age was determined as the age when their cumulative profit first exceeded zero. Figure 1 shows the distribution of breakeven ages in months for this group of cows. On average, the Holsteins studied had a breakeven age of 42 months, which typically occurred while in their second lactation. This average breakeven age is presumably lower for more recently born cows given the continuous improvements achieved for both production and reproduction. 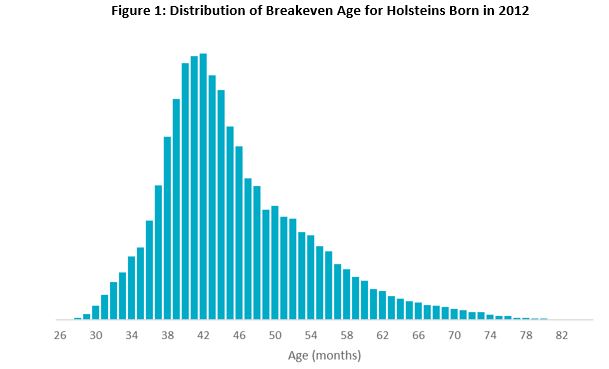 Every cow has a unique profit curve based on age at first calving, lactation curve, length of dry periods, and productive life. All of these factors can contribute to her breakeven age, especially age at first calving and first lactation production. Cows earn profit based on milk production above the cost of production, maintenance, and overhead. Every day dry also incurs costs, highlighting fertility and reproductive management in profitability. Figure 2 depicts typical profit curves, from first calving to the end of a fourth lactation, based on the average cow with a breakeven age within three categories, namely (a) less than 33 months, (b) equal to 42 months, and (c) greater than 59 months. Those cows with the earliest breakeven age combine an early first calving and high production while those at the far right of the Figure 1 distribution had typically a late first calving and low milk production. 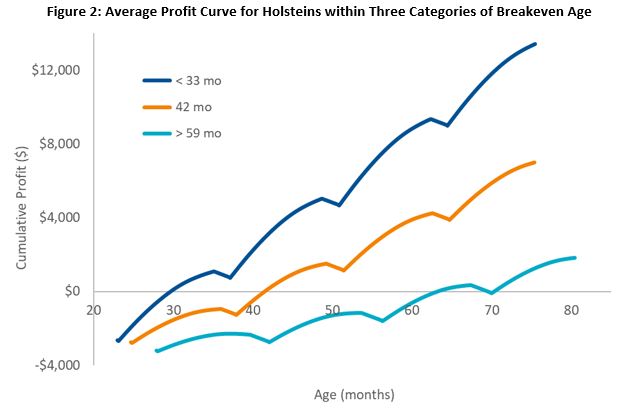 Much debate has surrounded an optimal age at first calving and often these recommendations differ or can depend on herd management or circumstances. An early age at first calving decreases initial investments in rearing and animals begin to earn income at a younger age, but this must be balanced with future production and reproductive performance to maximize economic return.

Figure 3 shows the average breakeven age and payback period length (i.e.: the amount of time after first calving for a cow to pay back her rearing investment) by age at first calving. This data suggests that achieving an age at first calving of approximately 21 months results in the earliest breakeven age. Calving earlier than 21 months of age lowers rearing costs but requires, on average, a longer period to pay back this investment and therefore results in a higher breakeven age. This is attributable to reduced first lactation milk yields frequently observed for animals calving too early. 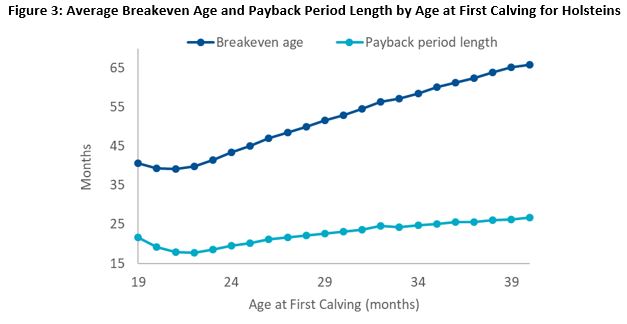 When just looking at the post-calving payback period length, an age at first calving of 22 months required the shortest amount of time post-calving to produce enough revenue to reach breakeven, despite greater rearing costs than those calving earlier. However, these cows were still older at their breakeven age compared to the group calving at 21 months as their quick payback period, on average, was not enough to overcome their longer rearing time. A previous analysis at CDN showed that an age at first calving of 22 months was the optimal target in order to maximize profitability to six years of age for Holstein. These estimated ideal targets of age at first calving for breakeven age and profit are lower than the current national average age at first calving for Holsteins, which is approximately 25 to 26 months.

A first calving age beyond 22 months of age continued to have increasing payback period lengths. Accordingly, the breakeven age tends to increase at a rate greater than the extended time spent in the rearing phase. The longer the time before first calving, the greater the original investment or deficit the cow must repay before reaching the breakeven point without apparent benefits in production yields.

A dairy cow incurs costs every day she is alive but it is not until she calves that revenue from milk sales are realised. A large amount of variation exists in the Canadian Holstein population for the age at which they return their original investment. The breakeven age is an element of the early stage of a cow’s profit curve, which is driven by age at first calving and milk production. Delaying age at first calving beyond 21 months increases rearing costs and ultimately cows spend more days with overall negative profit. An older breakeven age represents a greater time period of risk where a monetary loss would occur if a cow stops producing. The breakeven age, however, does not express the ultimate profitability of the cows.