Producers and consumers around the globe have had an increased interest in A2 milk, mainly for its improved digestibility. But did you know there is another milk casein entering the niche market? Kappa Casein is known to play an important role in cheese production. In response to the increase in marketing and selection of favourable milk properties, Lactanet offers Kappa Casein and Beta Casein gene test results.

Beta Casein Refresher
Beta Casein is one of four milk proteins, accounting for approximately 30% of all protein in milk. The gene controlling Beta Casein is located on chromosome 6 and is made up of a chain of 224 amino acids. There are two forms of Beta Casein, A1 and A2, with the A2 form related to improved digestibility. The possible Beta Casein genotypes are A2A2, A1A2, or A1A1.

As you may recall, Lactanet released its online A2 (Beta Casein) reports earlier this year to provide its DHI customers a summary of the A2 status of their animals and herd. For more information on how to use the A2 Genotype Reports please see our previous article, A2 (Beta Casein) Reports Now Available! Figure 1 shows an updated frequency of each A2 genotype by breed estimated using the gene test results currently available, with the count of animals in brackets. Guernsey, Jersey and Brown Swiss breeds have a higher frequency of the A2 gene compared to Holstein and Ayrshire. 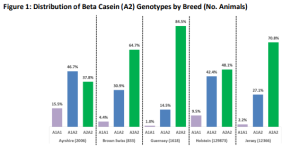 What is Kappa Casein?
Kappa Casein is another milk protein, which accounts for roughly 13% of all milk proteins. It is also controlled by a gene located on chromosome 6 and comprises a sequence of 162 amino acids. It plays an important role in cheese production, influencing the amount of clotting that occurs and the resulting cheese yield. During cheese production, Kappa Casein is a stabilizing factor that determines how well and how quickly the milk coagulates to form a curd.

Cows with the BB genotype produce milk with higher levels of fat and protein that clots more quickly and produces the highest cheese yield compared to the other genotypes. Cows with the EE genotype produce milk that does not clot to make cheese and is therefore considered the most undesirable genotype to cheese processors. The following image illustrates the order of Kappa Casein genotypes in terms of their respective cheese-making properties.

The Lactanet Genetics database has recently been receiving new and historical Kappa Casein gene test results from A.I. companies, breed associations, and international sources. The prevalence of Kappa Casein genotypes within a breed is dependent on the frequency of the A, B, and E forms in the population. Figure 2 shows the frequency of Kappa Casein genotypes by breed as estimated using the gene test results currently available, with the count of animals indicated in brackets. The Jersey and Brown Swiss breeds have the highest frequency of the BB genotype at 82.2% and 61.5%, respectively. As a result, the A and E forms are less predominant in these breeds. The frequency of the BB genotype is similar in the Guernsey (43.1%) and Holstein (37.6%) breeds but lower in Ayrshires at 18.1%. Since the genes controlling Kappa Casein and Beta Casein are both located on chromosome 6, some degree of inheritance relationship may exist and selection for both A2A2 and BB genotypes is possible based on known genotypes.

Summary
Producers interested in increasing the frequency of A2 cows in their herd can do so by the preferred use of A2A2 or A1A2 sires. Similarly, for Kappa Casein, selecting for BB or AB sires will gradually increase the frequency of BB cows. These sires can be identified using filtering features of the Advanced Group Query tool on the Lactanet web site. In addition to these tools, to select for Beta Casein, Lactanet customers can use the herd and animal A2 Genotype Reports accessible via your MySite account, which were launched in January 2022.

Balance of Traits to Genetic Impact