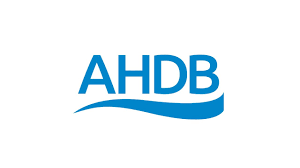 In this section, we look at how dairy farming in New Zealand compares with that in the UK.

Around 71% of New Zealand’s dairy herd is located in the North Island with Waikato as the home to over a million dairy cows.

Dairy farms on the South Island tend to be larger than those on the North Island in terms of area and number of cows. They also tend to have higher average herd production.

New Zealand produces around 21 billion litres of milk a year and dairy produce is the country’s biggest export category. There are 5 million dairy cows in New Zealand (Figure 1) with an average herd size of 440 cows.

The number of New Zealand dairy herds have generally been on a downward trend, but the average herd size has been increasing steadily due to the expansion of the dairy herd in the South Island.  Over the past decade, the number of cows per hectare have averaged 2.84. 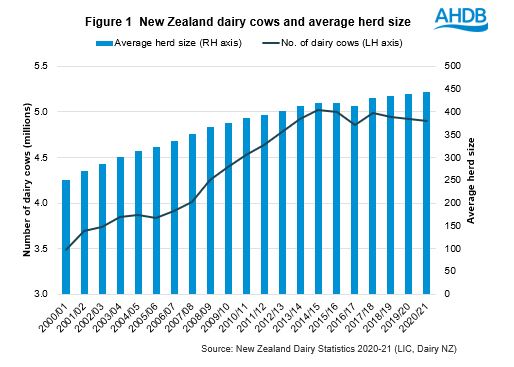 As with beef cattle and sheep, dairy farming in New Zealand is pasture based. A seasonal calving system means that the NZ dairy herd has access to grazed pasture throughout the year. Pasture grows fastest in the spring, so cows are calved accordingly to match the demand for feed and when there is more pasture available.

Spring in New Zealand runs from September to November (i.e same time as autumn in the UK). At this time, New Zealand produce is relatively high in volume and at its cheapest, meaning that its impact on the UK market is particularly high during this period.

Dairy cows in New Zealand spend most of their time outdoors in a pasture-based system, unlike their UK counterparts which will be housed during the colder months. However, there has been a move towards increased levels of housing of dairy cows by New Zealand farmers in recent years. A variety of reasons are behind this, including grassland management, health and welfare, effluent management and improving production levels. In most of these cases, farmers still rely heavily on grazed pasture but house cows for a few hours a day for some supplementary feeding or may move cows indoor for a few months in the winter if there is snow etc. Nevertheless, housing of dairy cows in New Zealand is mainly seen as an additional feature of the pasture system rather than a system in its own right, and compared to the UK, would still qualify as a predominantly pasture system.

In terms of the dairy sector’s operating structure within New Zealand, owner-operators account for 56% of all herds, with contract milkers comprising 14%. Sharemilking makes up the rest; this involves operating a dairy farm on behalf of the owner and receiving payment based on an agreed share of the farm’s income.

Podcast: The Canadian Dairy Vet from Hipra, Mastitis, and the 5 C’s of disease Prevention