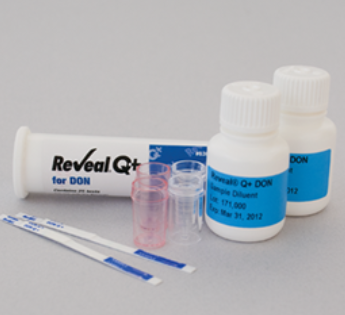 Neogen Corporation (NASDAQ: NEOG) announced today that it has launched a quicker, easier test to detect aflatoxin M1, a known cancer-causing toxin of concern to the global dairy industry.

Neogen’s new Reveal Q+ for Aflatoxin M1 can detect as little as 150 parts per trillion (ppt) of the toxin in milk samples in just minutes. The new test is designed for use with Neogen’s Raptor Integrated Analysis Platform, which controls the timing, temperature and reading of the test strips – allowing testers to simply add sample and walk away.

“Our addition of our test to detect aflatoxin M1 with our Raptor system simplifies the testing process for dairy processors, as they can now use our patented Raptor system to simultaneously test for this toxin, as well as dairy antibiotics,” said John Adent, Neogen’s president and CEO. “Now, dairy processors can simultaneously test one sample for the presence of aflatoxin M1 and classes of dairy antibiotics of known concern, including beta-lactams and tetracyclines. Testing milk samples doesn’t get any easier.”

Aflatoxin M1 is a carcinogenic metabolite of aflatoxin B1 that is produced in the rumen of dairy cattle. Many countries, including the United States and Brazil, have a regulatory limit of 500 ppt for aflatoxin M1. The new test can detect aflatoxin M1 in milk within a range of 150 to 600 ppt.

Reveal Q+ for Aflatoxin M1 utilizes the same incubation temperature and time as Neogen’s BetaStar antibiotic tests, including tests for beta-lactams (e.g., amoxicillin, ampicillin and penicillin) and tetracyclines. The Raptor platform automatically incubates and analyzes up to three milk samples independently and simultaneously. The system also protects the integrity and consistency of testing data by processing and analyzing results without additional operator input.