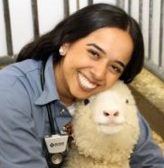 At this point, I’ve mentioned tirelessly that I’m a city girl, which means that I didn’t grow up seeing or handling large animals and food animals – this includes cows, horses, sheep, goat, pigs and chickens. Aside from a sprinkle of goat, chicken and horse experience, my first time truly working with any of these animals was when I set foot at OVC. It’s safe to say, I didn’t feel comfortable being around any of these species let alone being able to know how to treat them. However, as time went on and we worked with large animals at OVC, I slowly started to trust myself with handling cows, horses and sheep. By the end of Phase III (third year), I was comfortable with dairy cows and horses and felt capable doing physical exams, restraints, basic procedures and making diagnoses. I figured this would be handy when it came time for my externship as the 8-week externship is designed to be at a mixed animal practice so students see and treat all types of species.

With all that being said, before I began my externship, I couldn’t see myself doing any large animal treatments or procedures. I was happy to watch and help do physical exams but outside of that, I was a no-go. I figured that in order to try large animal medicine you had to really know what you were doing and I felt I only kinda sortaknew what I was doing. To make matters worse, I’m a small person (standing at a whopping height of 4 foot 11 inches), I think others are quick to assume that I’m physically limited in working with larger animals. I often take that pre-judgment and believe it, telling myself I can’t do it because I’m simply not big enough. Most people take one look at me and say, “so you’re interested in small animal, right?”. Regardless, my mentor has always been supportive and has enforced that I could do as much or as little as I wanted to do for any of the large animal medicine.

Now here’s the story of how I got outside my comfort zone. It was day three of my externship when we headed out to do pregnancy checks on a herd of beef cattle and I was ready to……..WATCH. I had done plenty of rectal exams at OVC, but I had never checked for pregnancy, so I figured I’d be of no use. However, as I watched the cows go through the squeeze chute, instead of feeling relieved that I wasn’t shoulder deep inside a cow, I felt antsy about not participating. I wanted to be in there helping check if cows were pregnant and how far along they were. I glanced at the rectal gloves and just went for it; I asked Dr. Gordzelik if I could check a few of the cows and he was on board and became my number one cheerleader. I wasn’t always accurate in how far along I thought a cow was in her pregnancy, but I was incredibly proud of myself for trying. My next obstacle was helping with tuberculosis (TB) testing for large dairy herds, which is far less extensive than pregnancy checks, but I was intimidated. There was one very long row of cows with their legs free to kick me. The first two times we went out to the dairy farm, I tested about two of 150 cows, which I thought was plenty because I was terrified of getting kicked. But as time went on, I reminded myself that I had learned and practiced safe handling with cows for three years at OVC – working with and around cows was no longer an unfamiliar concept to me. Accordingly, the following time we went out to the dairy herd, I told Dr. G that I was going to help him, so he started at one end of the cows and I started at the other. I tested around 80 cows that day, which was empowering and made me realize that I shouldn’t put restrictions on myself as to what I think I’m capable of. How could I expect others to believe in me if I hadn’t even taken the step in believing in myself? I can now proudly say that since my first week, I have helped with vaccinations, chokes or blockages in the throat or windpipe, C-sections, mass removals, pregnancy checks and TB tests in cows and horses.

This is a good reminder to not only me but anyone else doubting themselves – whether its veterinary related or not, we shouldn’t set limits as to what we think we can accomplish. The master in anything was once a student but in order to be a “student”, you have to at least put your foot forwards and attempt whatever it is you’re trying to accomplish. Failing at something is still miles better than not even trying. In other words: YOVO (you only vet once).