It has been said by many researchers around the world that “Phenotype is King!” in this era of genomics. What does this really mean? In Canada, there has been a recent surge of discussion on this topic, especially as it relates to the value of type classification data.  At Canadian Dairy Network (CDN), we took a closer look at the key questions being asked by breeders to help clarify the value of genotypes versus phenotypes    (i.e.: performance data) in today’s environment of dairy cattle selection.

Before the arrival of genomics ten years ago, the goal of A.I. companies was to maximize the number of new young sires offered to breeders each year.  The underlying principle was to offer as many good quality young sires as possible to increase the odds of having the most elite progeny proven sires four years later.  To encourage sufficient usage of young sire semen, various incentive programs were offered to breeders.  The end result was roughly 30% young sire usage versus 70% of semen used being from proven sires. In addition, breeders closely examined each individual young sire, not just their genetic potential represented by its Parent Average, but also by their pedigree details such as the sire stack as well as the strength of the maternal line including both production and classification results. To maximize the total number of young bulls tested each year, the total semen usage of each young sire was limited to target 100 to 150 daughters that would eventually have first lactation performance results for production and type. As an industry, breed improvement services such as herdbook registration, milk recording and type classification were widely promoted and encouraged to every breeder across the country.

The reality in the era of genomics is that Parent Average has been replaced by Genomic Parent Average and the average Reliability of these genetic predictions has doubled to now exceed 70% in the Holstein breed.  With this significant increase in accuracy of genetic information for the youngest animals in the breed, there has been a huge downward shift in the average age of parents, both sire and dam, of new young bulls being offered by A.I. companies to Canadian breeders.  As the trend moves to younger parents without an associated loss in terms of accuracy of selection, rates of genetic progress realized in Canada have more than doubled with genomics.  The relative genetic superiority of genomic young sires compared to proven sires available at the same time has now reversed the market share occupied by each group with young sires occupying 70% and proven sires 30%.

One consequence of the reduced generation interval for genomic young bulls offered by A.I. companies is the decreased opportunity for performance data to be included in the genetic evaluations available for their parents.  The sires of genomic young sires are frequently unproven when the son’s semen is first made available to breeders and with the growing use of in vitro fertilization (IVF) on young heifers, more and more dams have not yet calved for their first lactation.  Since breeders are asking about the impact of such dam classification data on the accuracy of the son’s genomic evaluations, CDN conducted a specific analysis to address this question.

The analysis focused on Holstein genomic bulls that were actively marketed in Canada and born from 2015 to 2017, which represents the most recent birth years possible. One critical fact about these bulls is that ≈30% were born in Canada, while the others were born in other countries, mainly the United States.  This is important since CDN only uses classification data in Canada to calculate genetic evaluations, which means that 70% of all young bulls marketed in Canada would not be impacted by any foreign classification data that they may have in another country. Of those A.I. young bulls that were born in Canada, Figure 1 shows the percentage within each birth year that currently have a dam classification at CDN.  For bulls born in 2017, roughly 60% now have a classified dam and this percentage increases by birth year to reach 79% for bulls born more than three years ago in 2015. These statistics demonstrate that dam of A.I. bulls do, in general, continue to get classified when in first lactation but they also suggest that a proportion up to 20% may not be classified in Canada for one reason or another.  This trend is disappointing to Canadian breeders who wish to have heifers and cows in their herds with pedigrees complete with production and classification data on both the maternal and paternal sides. 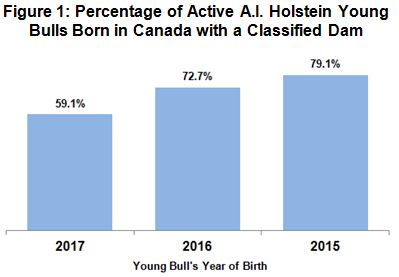 The CDN analysis also examined the impact of missing dam classification data on the accuracy of their son’s genomic evaluation for Conformation.  Across the 275 bulls born in Canada that were analyzed, those that had a classified dam received a Conformation evaluation with a Reliability that is 1.3 percentage points higher compared to bulls with an unclassified dam.  Both groups of bulls experienced the same gain in Conformation Reliability with genomics, averaging 34.5 to achieve 77% and 76%, respectively, for bulls with and without a classified dam.

So, if a bull dam’s classification data has such minor impact on the accuracy of their son’s genomic evaluation, why is type classification important at all?  Why do researchers claim that “Phenotype is King!”?  This question can be answered in two ways.

The second reason to collect phenotypes is more specific to each breeder at their herd level.  Every heifer calf born on a farm starts with a Parent Average as the first estimate of its genetic potential.  This estimate of an animal’s genetic merit serves as a predictor of those that are expected to have the highest level of performance in the milking herd.  After birth, there are two ways to improve the accuracy of this first estimate.  By genomic testing a heifer calf the Parent Average (PA) can be replaced by its Genomic Parent Average (GPA).  Later in life, however, measuring each animal’s own performance also contributes to their estimate of genetic merit, whether they have been genotyped or not.  As an example, classifying all first lactation animals in your herd results in changes to their Conformation index as they go from being a Parent Average (PA) to an Estimated Breeding Value (EBV).  Figure 2 shows the distribution of changes that occur for Conformation when a heifer PA becomes an EBV after being classified in first lactation.  Half of all heifers change by at least 1 point up or down once they are classified with some changing as much as ±8 points for their Conformation genetic evaluation. Classifying cows in your own herd will re-rank your cows and cow families, which can have a significant impact on your heifer replacement and culling decisions.

As expected, if heifer calves are genotyped and the PA is replaced by a GPA, then adding their classification phenotype in first lactation has less impact than the distribution shown in Figure 2.  That said, there are still 20% of heifers than experience a change in their Conformation index that is 2 points or more.

Genomics has changed so many things associated with dairy cattle selection schemes. Genetics offered by A.I. companies through their genomic young sires has reached incredible heights resulting in (a) a focus on reduced generation intervals, (b) doubling of the semen market share occupied by young bulls, and (c) more than doubling the annual rate of genetic progress.  These significant changes have also led to less complete information being available on young sire pedigrees compared to a decade ago, especially the performance data on bull dams. While this trend is undesirable from the perspective of pedigree completeness for resulting daughters, the impact on accuracy of selection decision is minor.  On the other hand, herd owners must realize the benefits and value of continued collection of performance data, such as production and classification, for their milking herd.  Such data serves to validate and/or improve the genetic evaluation predictions used to make important selection and mating decisions.