Economics drives profitability! In the dairy industry, there have been various factors in recent years that have affected the economics of genetic selection and herd management decisions. One of the significant outcomes has been a growing trend towards the use of beef sire semen for breeding Holsteins and dairy cattle of other breeds. Let’s take a closer look at the current status of this recent trend in Canada.

As part of the Lactanet database used for genetic evaluations, over 1.5 million new insemination records are added each year. For Holstein females, nearly 30 million breeding records have now been accumulated since 2000. As part of this data, the service sire is recorded, including its breed. Figure 1 shows the trend in terms of the proportion of Holstein females bred by semen grouped into three categories: 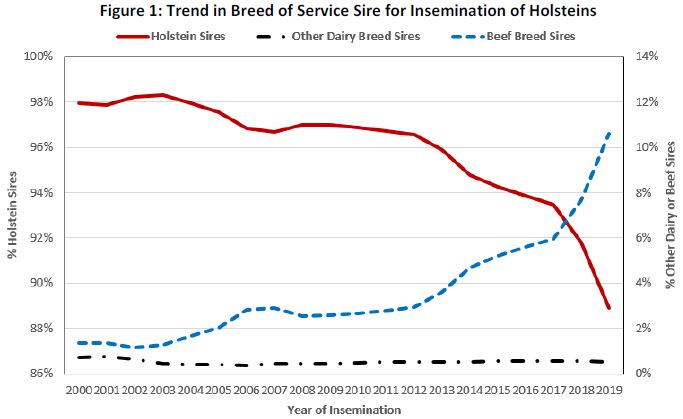 Figure 1 clearly shows that the percentage of Holstein females bred to sires of another dairy breed has remained very low at roughly 0.5%. Given the stability of this trend, the relationship between the two other trends is completely opposite. Prior to 2005, the use of Holstein semen to breed Holsteins was consistently 98% but this dropped slightly to 96% over the period from 2005 to 2013. More recently, however, the rate of this decreasing trend has been faster to hit 92% for 2018. Based on the data currently available for 2019, which represents approximately 40% of the full year, an all‐time low has been reached with only 89% of Holsteins being bred with Holstein sire semen, and this statistic is expected to be even lower as the year progresses. Figure 1 shows clearly that this decreasing trend of Holstein on Holstein breeding has completely resulted from a simultaneous increased popularity of breeding Holstein females with beef breed sires. The use of beef on dairy was consistently below 3% before 2013 but has now surpassed the 10% level so far in 2019.

Dairy production relies on pregnancies to produce heifer calves that end up as future replacements for the milking herd. Under normal circumstances, half of all pregnancies result in a bull calf, which are usually sold soon after birth, and until recently most Canadian dairy producers simply kept and raised all of the resulting heifers until they calved for the first time. While the number of heifer replacements needed depends on the herd replacement rate, raising all heifers born on the farm generally produces too many cows in the milking herd. When prices offered for bred heifers and/or young cows are high, selling them to other producers or for export make good economic sense.

Two major technologies changed the standard thinking and economics of dairy production in recent years. The first was the use of sexed semen to breed the best females in the herd, which translates to a 90% chance of producing a heifer calf from each pregnancy. In the most extreme scenario, the same number of heifer calves can be produced from 55% of the pregnancies if they resulted from sexed semen compared to using 100% conventional semen. Genomic testing is the second new technology with a major impact on dairy production economics. At a current cost of $33 per animal, producers are better able to determine which young heifer calves are not worthwhile raising to enter the milking herd, which then saves significant dollars otherwise spent on rearing costs.

Therefore, dairy producers using some level of sexed semen in the herd have two options available to them. The first includes producing even more heifer calves than needed for herd replacements but then genomic testing an appropriate proportion of them so as to know which to sell at a young age. A second option when using sexed semen to breed the top dams in the herd is to make different breeding choices when mating the poorest cows in the herd. These days, such breeding choices include the use of beef sire semen when there is already no interest in producing a heifer calf replacement from a given dam, and when there is a premium sale price for young calves, either male of female, that are beef x dairy crossbreds.

In the end, there are three economic realities related to breeding decisions that dairy producers need to think about for maximizing their herd profitability: