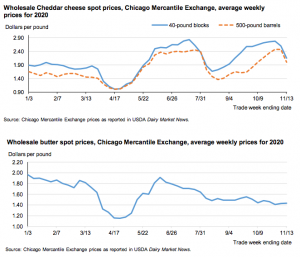 U.S. dairy product prices for NDM and dry whey have continued to be competitive in foreign markets, and the U.S. price for butter has become competitive as well. For the month of October, Oceania and Western Europe skim milk powder (SMP) export prices averaged $1.32 and $1.17 per pound, respectively.1 The dry whey price for Western Europe averaged $0.42 per pound. Oceania and Western Europe butter export prices averaged $1.67 and $1.84 per pound, respectively. The Oceania export price for Cheddar cheese averaged $1.73 per pound in October, substantially lower than U.S. domestic Cheddar cheese prices. Milk production growth was substantial in September. At 18.008 billion pounds, it was 2.3 percent higher than September 2019. Average milk per cow was 1,923 pounds per head, 38 pounds higher than September 2019.

Milk cows averaged 9.366 million head in September, an increase of 5,000 from August. Relatively low slaughter rates have contributed to the increase in milk cows. Weekly Federally inspected dairy cow slaughter has been lower than the corresponding week in 2019 from the week ending May 9, 2020, through the week ending October 31.

The largest year-over-year percentage declines in commercial use for the third quarter were for dry skim milk products (-16.6 percent), dry whey (-29.2 percent), and whey protein concentrate (-20.6 percent). Fluid milk sales declined by 1.6 percent from the previous year in the third quarter. Low inperson school attendance due to the pandemic likely contributed to the decline. 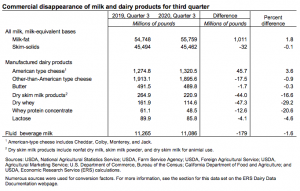 1 The source for Oceania and Western Europe prices is USDA Dairy Market News. Prices listed in this report are at the midpoints of the ranges.

4 Low-fat milk powders include those containing milk fat of 3 percent or less.