It is true… As an industry we ask Canadian dairy producers to collect A LOT of data on the animals in your herd. Our primary purpose for such data collection is to offer valuable reports and services to assist with herd management and increase your profitability. These services also include genetic and genomic evaluations for achieving your herd improvement goals, mainly through sire selection and mating decisions. There are also various regulatory programs that oblige producers to record various events on the farm and report them to the responsible organization. The Canadian Quality Milk Program and the proAction Initiative, led by Dairy Farmers of Canada, are excellent examples as well as the National Agriculture and Food Traceability System (NAFTS).

Canadian dairy producers have been recording and reporting information on their animals for over 130 years! In the beginning, breeders started recording the birth date and pedigree information of their animals in the national breed association herdbook. In the early 1900’s, the federal government introduced the first national milk recording program, called Record of Performance (ROP), which allowed producers to record how much milk and fat their cows produced. Later, breed associations introduced the type classification program to identify animals with superior body conformation. The need and desire to collect more and more data from dairy herds across the country continued to grow, which very significant benefits to the individual producers and the industry in general.

Today, more data than ever before is being recorded by producers and then transferred to a national database at Canadian Dairy Network (CDN). The vast majority of this data comes through a data flow pipeline that goes through the two milk recording agencies, CanWest DHI and Valacta. In addition to the traditional “milk recording” data (i.e.: milk yields as well as fat and protein components), CDN receives data associated with calving ease and calf survival, milking speed and temperament, reproduction, somatic cell and clinical mastitis, other cow diseases, as well as the disposal date and reason when each cow leaves the herd. In the past, the emphasis has been to have full recording of events on all milking cows in the herd but, nowadays, it is imperative to have the mindset of “whole herd recording”, including heifers from birth to first calving.

For a multitude of reasons, approximately 70% of all dairy producers enrolled on milk recording have decided to include heifers on the herd inventory within the DHI database, which gets transferred to CDN. This proportion reaches 85% for herds with at least 50 cows. A major reason that heifers are included in the inventory for many herds is the fact that DHI facilitated the herdbook registration process through its electronic registration services. Many herd owners with an on-farm herd management software system also enter the heifers as soon as they are ear tagged and identified in order to record each event, including treatments given to each animal. Once in the herd management system, herd owners are therefore also interested in maintaining an accurate herd inventory. To do so, they also record when any heifer leaves the herd, for any reason. This may include heifers sold to other producers, or even exported, but would definitely include heifers that died as well as the associated reason.

There is a growing need for producers to record and report to DHI all dates and reasons why heifers are leaving your herd, similar to what has long been done for cows. Figure 1 clearly shows the increasing number of records reported by producers to DHI regarding heifers that left their herd before reaching 12 months of age, which reached nearly 9,500 in 2014. Of these records, roughly one-third related to heifers that were sold to other producers or for export. The remaining two-thirds were associated with heifers that left the herd for an involuntary reason such as illness, injury, death, etc., which can be very useful information for the industry. Although this is a good start to recording heifer disposal data, unfortunately 60% of the heifers that left the herd involuntarily during 2014 were reported with a reason as “unknown”. Producers are encouraged to record specific reasons why each heifer leaves the herd in order to monitor trends in heifer mortality. For example, the recent discovery of HCD, the haplotype associated with cholesterol deficiency in Holsteins, may have been revealed earlier in Canada if more data was available on heifer mortality including accurate reasons. 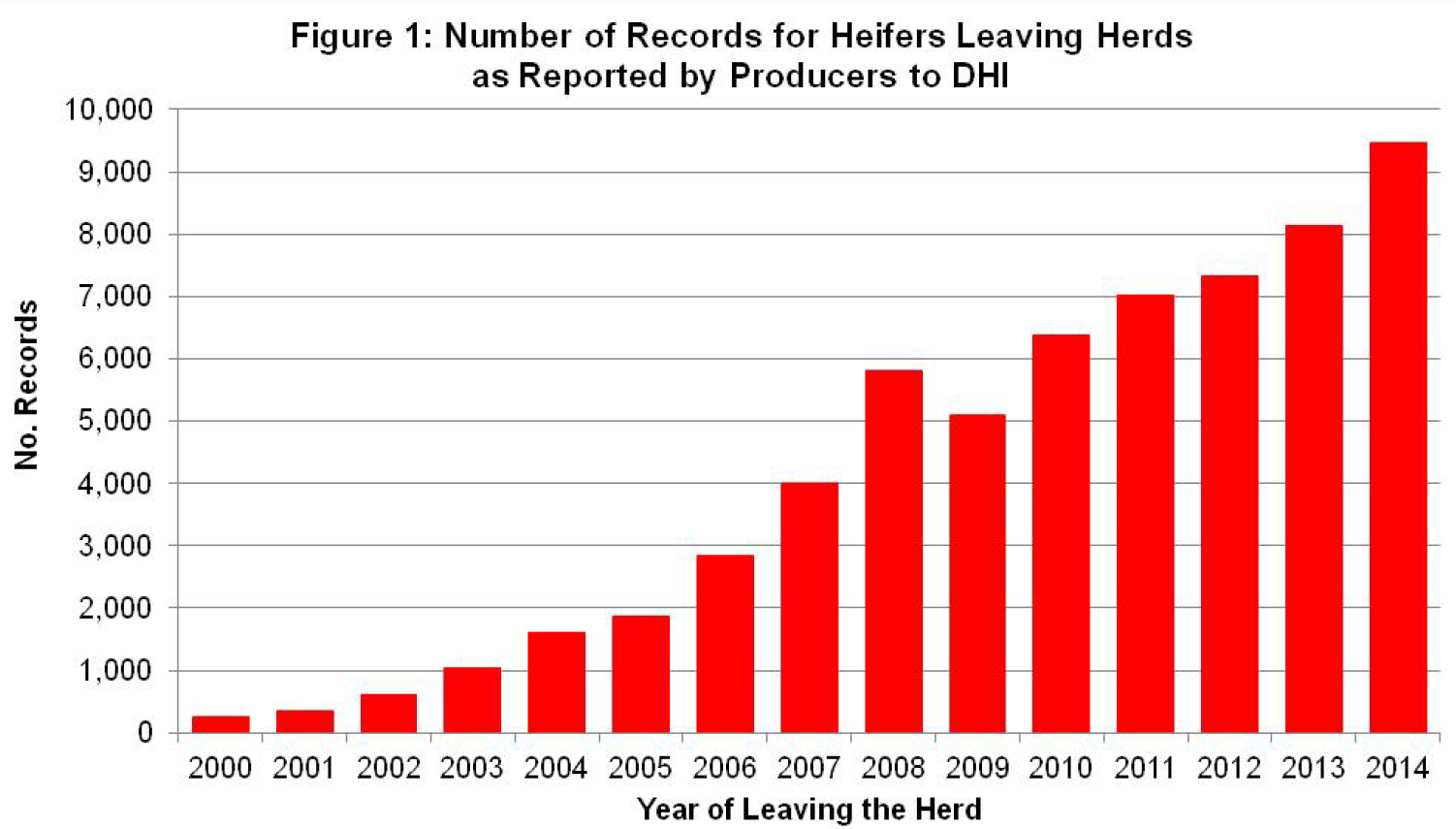 Among the thousands of herds enrolled on DHI that include heifers in the herd inventory, only a portion are also reporting the dates and reasons when any heifer leaves the herd. Based on an analysis at CDN, approximately 30% of all herds on DHI are reporting data associated with heifers that leave the herd. Figure 2 provides a regional comparison of this percentage, which shows that 50% of the herds on DHI in Western Canada are reporting these heifer events while this proportion is 23%, 30% and 28% for herds in Atlantic Canada, Quebec and Ontario, respectively. The higher rate of data collection in Western Canada is associated with larger herd size and the common usage of DairyComp as the on-farm management software. 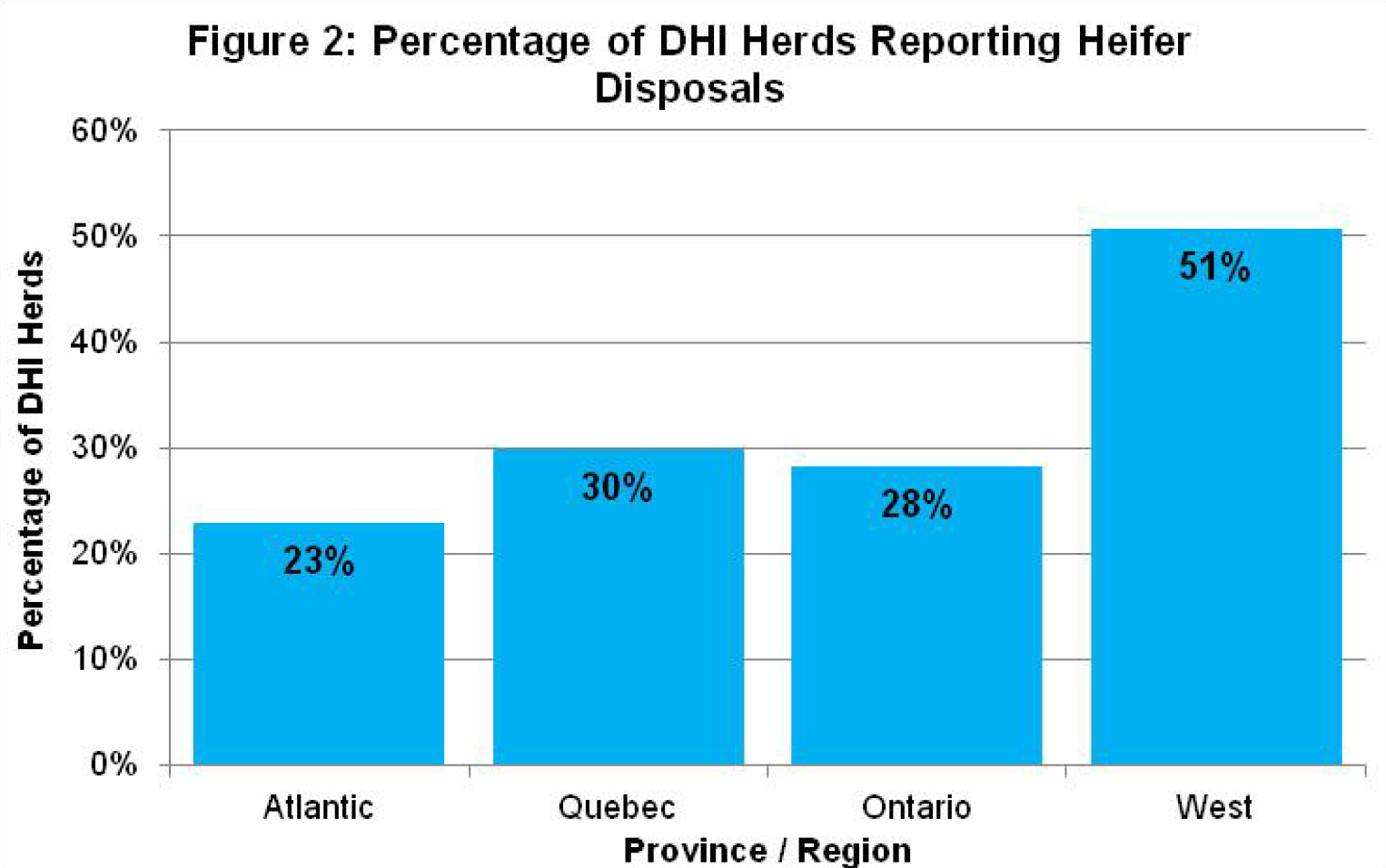 There can be no doubt that Canadian dairy producers will be collecting more and more data on the heifers in your herds. For example, the implementation of our national dairy cattle traceability system, which is targeted for full implementation by 2017, will require all calves to be tagged soon after birth. When tracking animal movements, it will also be mandatory to report when a heifer leaves the farm, including those associated with involuntary disposals such as calf mortality. In addition to the traceability module of Dairy Farmers of Canada’s proAction initiative, the biosecurity module also affects recording events on heifers. As a minimum, producers will be required to record disease events in calves, including diarrhea, pneumonia, fever and death.

In terms of other benefits of recording events associated with heifers, including the date and reason why any heifer leaves your herd, it would be possible for CDN to establish a genetic evaluation system for early calf mortality. Bottom line message… there is a growing demand for producers to collect health events on heifers as well as reasons why they leave the herd. Some of this demand will be imposed by regulation so it seems wise to start now.