There is no doubt that the arrival of genomics in Canada ten years ago has had a major impact on the entire dairy industry. It can be argued, however, that no segment of the industry has been more affected than the A.I. sector. In order to survive the competitive environment of that business, both nationally and internationally, A.I. companies needed to embrace and adapt to a new genetic selection scheme based on genomic selection. Canadian Dairy Network (CDN) recently looked at what has changed in terms of young bulls that were actively marketed to Canadian dairy producers in the years before the arrival of genomics (i.e.: 2004 to 2009) compared to those marketed in Canada more recently.

Figure 1 shows that the total number of young Holstein bulls with semen sold in Canada has not significantly changed since 2004, averaging 445.  That said, genomic evaluations make it easier for A.I. companies to market young bulls internationally, which means there are several more players offering genomic young bulls to Canadian producers.  Figure 1 also shows the increasing percentage of those bulls in A.I. that resulted from embryo transfer or manipulation such as embryo splitting, which now surpasses 90%.  This trend generally reflects the parallel increased adoption of new reproductive technologies such as in vitro fertilization (IVF). A reality of the new selection scheme based on genomics is the huge shift towards the use of young animals as parents of potential young bulls for entry into A.I.  This shift results from the significant gains in accuracy of genetic evaluations for young bulls and heifers due to genomics. 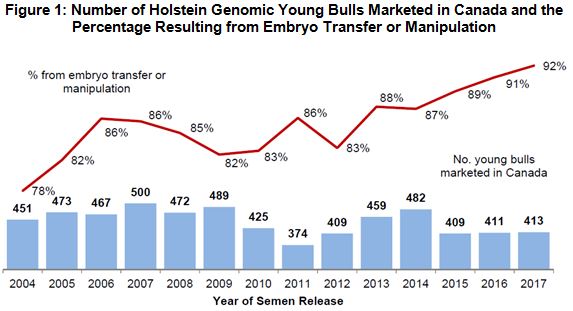 While the change towards the youngest parents possible and high selection intensity for A.I. purchases may be criticized by some, Figures 2 and 3 show the positive impact in terms of the average genetic merit of young Holstein bulls marketed in Canada since 2004 for LPI and Pro$, respectively. Prior to genomics, the average increase in LPI for young bulls with semen released between 2004 to 2009 was 84 points per year. For the most recent complete 5-year period from 2012 to 2017, this increased significantly to average 121 LPI points per year. For Pro$, these same averages were $142 and $206 annually, as shown in Figure 3.  This means that genomic young bulls released this year are expected to increase the average lifetime profit of their daughters by more than $200 compared to daughters of young bulls released a year earlier. 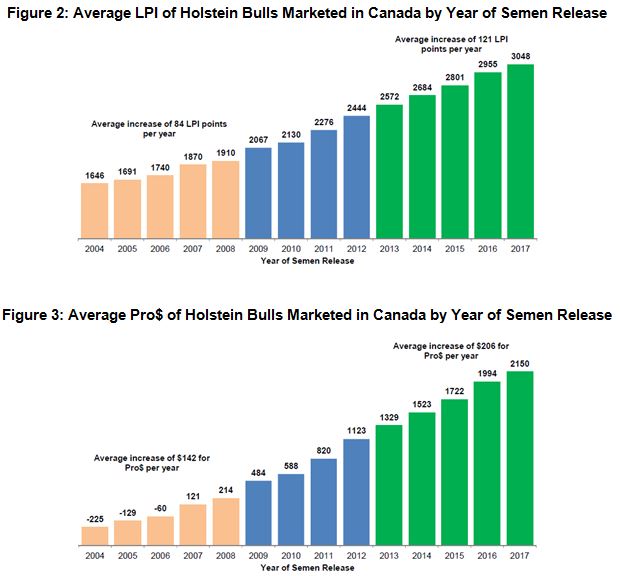 The race among A.I. companies to identify, purchase and offer to producers the highest genomic young bulls possible has also led to the adoption of strategies that put greater control in the hands of such companies. Essentially all leading A.I. organizations globally have implemented business plans that include the ownership of elite females, based on genomics, which serve as a primary source for producing the next generation of elite genomic young bulls.  In Canada, the five A.I. companies with the largest market shares all now have their own female multiplier herds and associated breeder prefixes including “Progenesis” for Semex Alliance, “S-S-I” for Select Sires, “Peak” for Alta Genetics, “Denovo” and “ABS” for ABS Global and “Co-op” for Genex/CRI.

The recent CDN analysis also examined the breeder prefix of the young Holstein bulls with semen released in Canada from 2004 to 2017. On average, there were over 220 breeder prefixes represented among those bulls with semen marketed in Canada.  Of these, two-thirds of the breeders provided only one bull during any given year and an average of 40 breeders were able to provide three or more bulls to A.I. that were marketed in Canada. In any given year, there were a handful of breeders that contributed at least 10 bulls that were offered in Canada. Figure 4 shows the trend in the percentage of young bulls marketed in Canada that were sourced from the ten most frequent prefixes within each year of semen release.  This proportion ranged between 19% and 28% for all years from 2004 to 2014 but has increased since then to 47.9% for genomic young bulls marketed in Canada in 2017.  This means that roughly half of all bulls entering A.I. for use by Canadian producers have been sourced from ten breeder prefixes. The main reason for this concentration of bulls sourced from fewer breeder prefixes is the introduction of female breeding programs by major A.I. companies in addition to contractual arrangements between A.I. organizations and specific breeders. 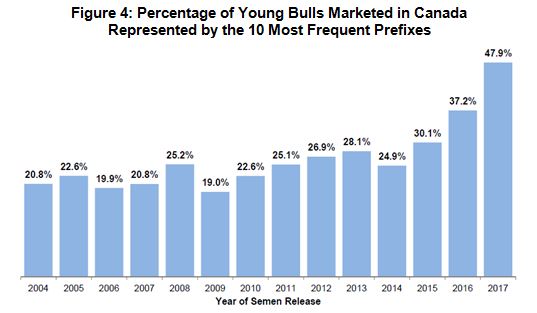 Genomic selection has significantly changed the design and structure of the typical genetic improvement scheme for dairy cattle.  Traditional young sire incentive programs have been replaced by strong demand for young sire semen to a point where it represents nearly 70% of the market share. The increased accuracy of evaluations for young males and heifers has moved sire selection schemes towards genomic testing for screening so that only the most elite are purchased for entry into A.I. In addition, the increased adoption of reproductive technologies such as IVF has significantly reduced the average age of the dams of young bull entries into A.I. The competitiveness of the A.I. sector globally has moved such global companies to strategies whereby they own their own females to have a greater control on sourcing the next generation of elite genomic young bulls.  In the end, this all translates to higher quality young sires offered to Canadian producers, which translates into faster rates of genetic progress for the breed.