The number of youngstock (0-24 month olds) in the female dairy herd has been increasing recently. As at 1 April, youngstock numbers totalled 902,000 head, 4% (32,200 head) higher than the same time last year.

Since January 2020, we’ve seen a year-on-year increase in the number of 0-6 month old dairy females being registered. The last six quarters have all shown year-on-year lifts, with the last three all rising by more than 5% compared with the same quarter the year before.

The rises are a result of a jump in the use of sexed semen by the GB dairy industry, which accounts for over 50% of total dairy semen sales.

The last time such strong growth was recorded in 0-6 month olds was back in 2014/2015. This was then followed in 2016/2017 with some significant year-on-year declines, off the back of a collapse in milk prices. 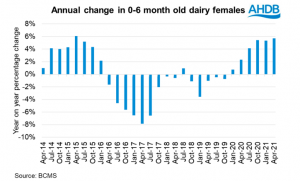 We can normally follow the change in 0-6 month olds through the herd over time, although it does not always result in an overall increase in the size of the country’s milking herd. A harder cull of older animals may offset the rise in youngstock numbers. The result is a younger milking herd, but not necessarily a larger one.