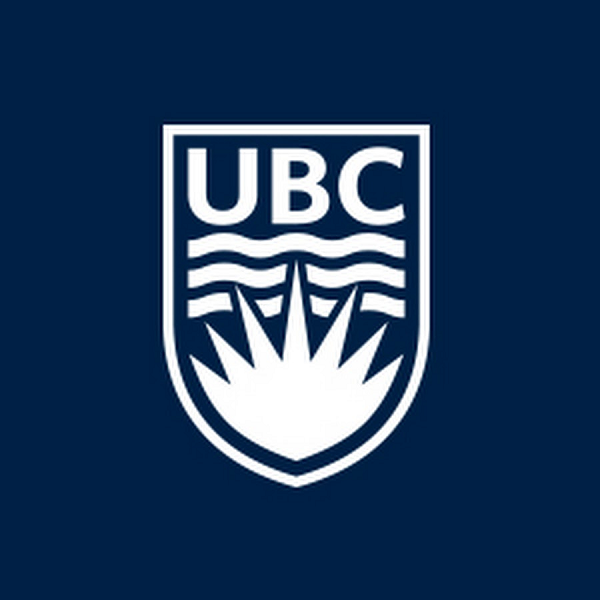 Lameness is a painful but common condition in dairy cows, characterized by abnormal gait. Various surveys have estimated lameness prevalence on farms in North America to be above 25%, posing both an animal welfare and economic concern for the dairy industry.

While various management and environmental factors contribute to lameness on farms, the ways in which dairy cows are housed is particularly important. Indoor systems with hard, slippery concrete flooring do not allow for natural locomotion and can lead to trauma and lesions in the hoof. Various studies report that farms who rear their cows on pasture have less lameness than those who rear their cows in conventional indoor systems. Providing a brief period of housing on pasture has also been found to improve locomotion and hoof health in dairy cows.

Over the course of many studies, research from the Animal Welfare Program at The University of British Columbia has investigated the use of a free-choice system, where cows are provided with pasture and indoor housing simultaneously, and each cow is able to choose when she wants to use each of the environments. Such a system may be more viable for producers, while also aligning with cow’s preferences and motives to be outdoors and resonating with public values. Lame cows may especially benefit from pasture when provided free choice access.

A recent study conducted at The University of British Columbia’s Dairy Education Research Centre provided lame cows with free-choice access to pasture (as compared to exclusively housed in an indoor barn) and investigated effects on lameness recovery and lying behavior. The researchers housed 54 lame lactating Holstein cows in a single pen inside a free-stall barn; half the cows were provided with free-choice access to pasture (via an electronic sort gate), while the other cows in the group remained indoors. Cows were followed for seven weeks, and researchers collected information on pasture use,
lameness status and lying behaviour.

Lame cows provided with pasture access spent around 15% of their time on pasture, but there was considerable variation in pasture use between animals (0 – 40%). Pasture use was highest in the evening, particularly when weather was warmer, likely because it was cooler outside on the pasture than inside the barn. Cows used the pasture primarily for standing and used the indoor barn more for lying down.

Over the course of the study, less than half of the lame cows became sound, but this number differed for cows with or without pasture access (Figure 1.1). Cows were more likely to recover, and spent more time sound, if they were provided with pasture access as compared to if they were housed only inside the barn. These results suggest that free-choice pasture access is beneficial for lame dairy cows. This finding may be due to the pasture providing a softer standing surface, and allowing for greater movement opportunities. 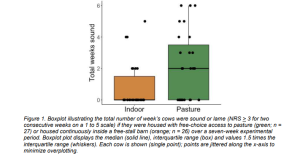 Results from this study suggest that lame cows will use pasture when provided a choice and that pasture access aids in lameness recovery. Free-choice pasture access is a housing option for producers wishing to address lameness on their farms.

Managing and monitoring the health of transition dairy cows