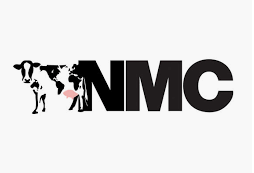 Many veterinary and milk quality laboratories are now using MALDI-TOF MS (Matrix Assisted Laser Desorption/Ionization-Time of Flight Mass Spectrometry) for identification of bacteria from milk samples. The aim of this article is to provide information on this new technology and on current practices being followed by diagnostic laboratories for reporting results generated using MALDI-TOF.

MALDI-TOF uses laser excitation of biomolecules, such as proteins and mass spectrometry, to create a unique protein spectrum pattern of an unknown microorganism. Results are compared with thousands of spectra in a reference database, from which a bacterial identification is provided. The procedure is rapid, accurate, and frugal in its use of chemicals and human resources required for testing, while providing species identification for a majority of samples tested (1).

Figure 1. Principles of MALDI-TOF analysis. 1) For bacterial species that can be grown on culture media, an isolated colony is picked and dropped on a metal target. 2) the colony (in red) is covered with a matrice (in yellow). A pulsed laser is then used to ionize the isolate’s molecules. The time of flight of the various molecules in an electrostatic field is then captured by an ion detector to generate a mass spectra profile for that isolate. 3) The observed profile is then compared to those of a reference database with spectra from thousands of known bacteria and a score describing confidence in the genus- or specieslevel identification is reported.

Why use MALDI-TOF instead of traditional microbiological identification methods?

Like traditional microbiological methods, a 24- to 48-h culture is needed before proceeding to MALDITOF identification of a given isolate. Therefore, organisms that do not grow on common media cannot be identified using MALDI-TOF. When bacterial colonies can be cultured, however, they can then be identified to genus (e.g. Staphylococci) and species level (e.g. aureus), in one single and rapid (<60 sec) analysis using MALDI-TOF. In comparison, traditional microbiological methods often require multiple biochemical tests, re-incubation, and an additional day before a final identification can be given (2). So, an important advantage of MALDI-TOF technology is its promptness for obtaining an identification.

The most important advantage of MALDI-TOF technology, however, is that it can provide bacterial identification information more specific than traditionally reported for organisms isolated from milk. For instance, in the past, several expensive tests (e.g. test kits for bacterial identification or gene sequencing) and additional days were needed to identify to the species-level members of closely related bacterial groups, such as non-aureus Staphylococci (NAS, also known as coagulase negative Staphylococci or CNS), and these tests were generally not conducted on a routine basis. MALDI-TOF technology allows a greater number of bacterial isolates to be rapidly and accurately identified to species level. Therefore, many groups of bacteria, such as those traditionally identified as NAS, will now be identified using MALDI-TOF by genus and species (e.g. Staphylococcus chromogenes, Staphylococcus simulans) (3, 4). Though it might be disturbing for a practitioner to receive for the first time a milk culture result reporting growth of an uncommon bacterial species, it is important to remember that these species “appeared” uncommon because they were not identified to species level with traditional microbiological culture. Presence of these pathogen species in milk is not novel; it is the fact that we can now identify them that is novel. If you see unfamiliar bacterial names on your mastitis reports, the diagnostic laboratory can provide further information on these.

A list of many of the bacterial species that may be isolated from milk samples using MALDI-TOF identification is presented in the Appendix. They are grouped under their common classification for mastitis management purposes. Mastitis researchers are currently applying bacterial identification information generated using MALDI-TOF and other advanced technologies to explore the role of specific bacteria present in milk and to understand their epidemiology. This may lead to valuable information that will be used to implement new prevention and control strategies, and refine mastitis treatment protocols in the future. Meanwhile, current knowledge on the group of organisms they belong to should be used for management of intramammary infections caused by these organisms.

How does MALDI-TOF testing compare with PCR testing?

Like traditional bacteriological methods, MALDI-TOF absolutely requires the culture of an organism on culture media (see Figure 1). Therefore, many of the same advantages and disadvantages reported for routine milk analysis would also apply to milk culture, followed by MALDI-TOF identification (2). Readers are encouraged to consult the NMC PCR (polymerase chain reaction) Fact Sheet for an exhaustive description of the advantages and disadvantages of both culture and PCR-based methods. Briefly, by using PCR, milk can be tested directly without culture, which can reduce the time to results by 24 h, compared with culture followed by MALDI-TOF identification. A PCR test, however, will only be able to test for the presence of the specific organisms targeted ahead of time in that test, whereas, with MALDITOF, every organism species retrieved on the culture media can potentially be identified.

How confident can we be with MALDI-TOF results?

To ensure that MALDI-TOF identification results are consistent among laboratories, standard procedures are used by all labs. Every laboratory using MALDI-TOF identification can provide information about the MALDI equipment manufacturer, specific machine, software version, and, most importantly, the use of any custom library for identification and the minimal score required to accept identification at the genus and species levels. Indeed, laboratories have the opportunity to add main spectra in custom databases using well-characterized isolates, which may allow for identification of additional species or improve accuracy for already identifiable species (4). Mentioning use of such custom databases is, therefore, of importance for interpretation of MALDI-TOF results. In 2018, the manufacturers’ libraries contained protein profiles for up to 7,311 isolates from 2,500 microbial species (library contents differ by MALDITOF used). Like many microbiological identification systems, most of the well-characterized isolates used to generate the reference profiles found in the manufacturer’s database are human isolates. For many microbial species, protein profiles of animal isolates will be quite similar to those of human isolates and will be correctly identified. It remains to be determined whether this is true for all species (1).

In summary, MALDI-TOF Mass Spectrometry is now widely used in veterinary microbiology laboratories. It has been proven to provide consistent, accurate, and rapid identification of bacteria, fungi, and mycobacteria. One powerful feature of this technology is the ability to expand and share databases. As information is added to these databases, more bacteria will be identified to the species level in laboratories using this technology and the updated databases.