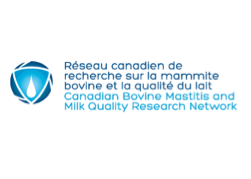 The main bacteria responsible for causing mastitis can be divided in two categories: contagious bacteria and environmental bacteria. This distinction is very useful since it helps in taking appropriate action to prevent and control mastitis based on the characteristics of target bacteria.

Contagious bacteria live on the skin of cows and multiply inside infected teats and quarters. They are excreted with the milk during milking. These bacteria spread from cow to cow mainly through contaminated milking equipment, towels or wash towelettes, or through the hands of the milking attendant. They are well suited for quickly colonizing the teat canal and the udder because of their great ability to stick to mammary tissue – this contamination mode results from bacterial growth. These bacteria generally cause an increase in somatic cell counts (SCC) and subclinical mastitis, with few clinical mastitis cases. The main contagious bacteria are Staphylococcus aureus, coagulase-negative staphylococci, Streptococcus agalactiae and mycoplasma.

Environmental bacteria live and multiply in the cow’s environment: manure, ground, bedding, vegetation, water and the cow’s skin. They are therefore very difficult to eliminate. These bacteria are often considered to be “opportunistic”, i.e. they take advantage of circumstances that make the mammary gland more susceptible to infection, which in turn promotes environmental contamination. A large proportion of infections occur during the two weeks immediately following drying-off and the two weeks that precede calving, when the cow’s natural defences are the weakest. Poor teat disinfection or the use of a dirty cannula during intramammary infusion is a common cause of infection. The absence of a keratin plug also increases the risk of infection.

During lactation, the risk is higher right after calving. Environmental bacteria contaminate teat ends between milkings and infect quarters through milk backflow resulting from improper milking technique (poor adjustment – squawking) – this contamination mode results from propulsion. These bacteria generally cause clinical mastitis – abnormal milk, swelling, redness, heat from the infected quarter and little or no fever. The main environmental bacteria are coliforms such as Escherichia coli and Klebsiella spp. and streptococci in general such asStreptococcus uberis and Streptococcus dysgalactiae.
In short:
Which is it? Contagious or environmental?
When contagious bacteria are predominant in a herd, an elevation of the herd’s SCC can be seen without being necessarily accompanied by an increase in the number of clinical mastitis cases. However, when environmental bacteria are predominant, they more often cause an increase in the number of clinical mastitis cases. High bulk SCC and clinical mastitis tend to be the result of different bacteria. SCC reports from your milk quality control program and the chart below can help you to assess the source of the problems you are experiencing.
Gram-positive and Gram-negative Bacteria

Laboratories use a special staining technique to differentiate bacterial species based on the properties of their cell walls. This technique is used to classify mastitis-causing bacteria into two groups: “Gram-positive” bacteria and “Gram-negative” bacteria. Used by diagnostic laboratories, the technique is named after its inventor, the Danish bacteriologist Hans Christian Gram, who developed it in 1884. Under the microscope, Gram-positive bacteria appear blue while Gram-negative bacteria appear red.
Examples of Gram-positive and Gram-negative Bacteria
Minor and Major Bacteria
Major mastitis-causing bacteria are classified as being either environmental bacteria or contagious bacteria. They are usually considered more virulent and damaging to the udder than the minor mastitis bacteria (Table 1). At present, the minor bacteria CNS are the most common group of bacteria found in udders of lactating cows in Canada and in a number of countries. Mastitis caused by CNS is typically mild or subclinical and is most commonly associated with increased milk SCC. Similarly, infections with Corynebacteria spp., other common minor bacteria, cause a moderate increase in SCC with minimal to no milk production loss.
Characteristics of Major and Minor Mastitis Bacteria