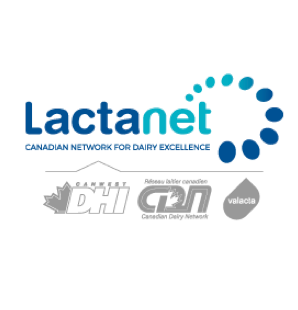 The April 2021 official genetic evaluation release by Lactanet brings changes to the evaluations for Conformation and the four major scorecard traits; Mammary System, Feet & Legs, Dairy Strength, and Rump in the Holstein, Ayrshire and Jersey breeds. While these new evaluations are to be used and interpreted in the exact way as before in that the average sire is still at zero and the range is roughly -15 to +15, they are now a result of composite indexes. The move to composite indexes is an optimal way to maintain a consistent trait definition across all animals in the breed and provides a means for a more immediate response at a genetic level to changes in the classification program.

Selection indexes are commonly used in genetic evaluations and are clearly 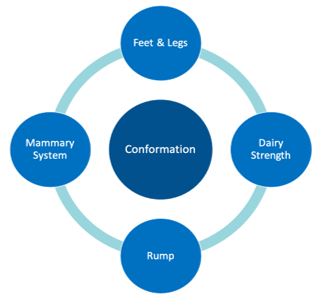 represented by LPI and Pro$. We also use indexes for biologically complex breeding goals that require multiple traits to be measured, such as Daughter Fertility and Hoof Health. All of these indexes combine the evaluations of many individual traits of interest at specified weightings to form a new single value. Such indexes can then be used to select for multiple traits at once and move toward a more comprehensive selection goal. In this same way, the new composite indexes for each of the four major scorecard traits combine evaluations for all of the descriptive traits included in their respective scorecard section within the Canadian classification system. The evaluations for Mammary System, Feet & Legs, Dairy Strength, and Rump are then combined into the animal’s composite index for Conformation. This is in contrast to the previous method, which directly estimated genetic evaluations using the actual scorecard scores and overall Final Score from Holstein Canada’s classification system.

The weightings for the index formula were derived to best reflect today’s classification system and attempt to best replicate the former proofs of proven sires whose daughters were all classified in recent rounds. Consideration in the formula is also made for intermediate optimum traits, such as Teat Length, where a proof closer to zero may be ideal with extremes in either direction being unfavourable. Modifications occur to the classification system over time, including the contributions of the various descriptive traits to the major scorecards or even the addition of new traits. While it would normally take several years for such changes to infiltrate the genetic evaluation system given the large historic volume of data, composite indexes bring updates at the classification level into genetic evaluations more immediately and reflect them in the evaluations of all animals regardless of their age or when they may have been classified.

In the Holstein breed, the average stature of first lactation cows continues to increase slowly and various measures have been put in place at the classification level to minimize this trend. To support this desired industry direction at a genetic selection level, Stature has been included in the composite indexes for both Mammary System and Feet & Legs with a weighting such that these evaluations are now independent of Stature. Previously, selection for improved Mammary System or Feet & Legs would have also inadvertently resulted in some selection toward taller cows, due to an underlying correlation with Stature. Ideally, one should be able to improve these major scorecard traits without affecting Stature in any direction. In terms of the impact that this Stature adjustment has on resulting evaluations, for animals above breed average for Stature, every 5-point increase (i.e.: 5T vs 0, 10T vs 5T, etc.) translates to a 1-point decrease for the Mammary System composite.  For Stature evaluations below zero, every 5-point decrease in Stature (i.e.: 0 vs 5S, 5S vs 10S, etc.) increases the Mammary System composite by 1 point.

The shift to composite indexes can also help to address other emerging concerns that the industry is seeing in terms of the frequency of short teats and straight rear legs. With a similar concept to Stature, the weighting of Teat Length within Mammary System was modified to promote selection for longer teats through the selection for improved Mammary System. Within the new Feet & Legs composite, the weighting of Rear Leg Side View was also increased to have the composite neutral with this trait and help ensure that selection based on Feet & Legs will not continue to result in an increased frequency of straight legs in the breed. The presence and degree of these trait adjustments within the various composite indexes will be routinely assessed to best reflect the needs within the breed.

When considering selection based on these new type composite indexes, it is the expected response of the individual traits within each scorecard section that should be the central focus. The magnitude of the correlation and direction of change expected in the traits within each composite index are shown in Figures 1 and 2. For example, when selecting for Conformation, you can also expect a very strong response for improved Mammary System, given the correlation of 78%, and then relatively less correlated response for the other scorecard traits (Figure 1).

The correlations presented in Figure 2 can be interpreted in a similar way. The expected response for the individual traits within each scorecard section is a function of their weightings in the composite formula, but also, importantly, the associations amongst the traits at a genetic level. In general, selection decisions using these new composite indexes for major type traits can be done as before and will result in a greater consistency with the objectives set by the current Canadian classification system.  In addition, the consequences of including the extra trait adjustments can also be visualized by the correlations in Figure 2, especially noting the near zero correlation between Stature and each of Mammary System and Feet & Legs.

Some degree of change is expected due to the transition to composite indexes alone and then furthermore with the Stature, Teat Length, and Rear Leg Side View adjustments included. While there will be minimal change for the average animal, some may experience more notable decreases or increases in their evaluations for major type traits. In general, older bulls are more likely to have greater change in their proofs due to their daughters having been classified in rounds that may not include the same trait scoring definitions and weights as more recent years. These changes result because their daughters would most likely not achieve the same scorecard points and/or Final Score if classified today. Bulls that have more extreme proofs in either direction for the scorecard traits will also experience greater change with the move to composite indexes. In looking at the Top 100 Conformation Holstein sires with official proofs, the group saw about a 1-point decrease in their Conformation proof, on average, before considering the annual genetic base update, but some bulls experience significantly larger changes.

Genomic young bulls garner much of the attention for selection to produce the next generation and are also inclined to see changes. Most visible are the changes to the top genomic Conformation bulls. Since composite indexes for the major scorecard traits are combinations of the descriptive trait evaluations, it is more difficult for bulls to achieve those extreme values for Conformation beyond the typically expected range exceeding +15. Animals must excel in the entire profile of descriptive traits in the section. This translates to a tighter range for Conformation evaluations among genomic young bulls. High end GPA Conformation bulls therefore experience some degree of drop in their ratings due to the composites and the associated trait adjustments.

The April 2021 genetic evaluations for Conformation and the four major scorecard traits have changed to be the product of composite indexes. This change brings consistency to all animals within the breed and reflects the modernization of trait definitions for overall Conformation and the four major scorecard traits. The change also serves to address, at a genetic level, emerging issues and unfavourable trends in the breed as indicated by the industry, which are becoming all the more important with the growing popularity of automated milking systems. There are some considerable changes to published evaluations for these major type traits during this initial transition to composite indexes, but this move brings gainful advancements for the continued genetic progress and achievement of goals established for each breed.