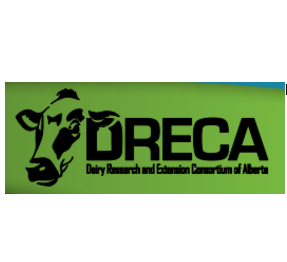 Agriculture is recognized as a contributor to climate change due to emissions of greenhouse gases (GHG). Cattle substantially contribute to agricultural GHG through production of methane (CH4) gas in their digestive tract. Production of CH4 is also a loss of productive energy for the animal. Therefore, decreasing CH4 production in the animal may improve feed efficiency and productivity while also reducing GHGs. Feeding rumen-unprotected fat (fat that is broken down in the rumen rather than bypassing to the intestines) can decrease CH4 emissions in dairy cows. Linseed is one of the most effective fat sources to reduce CH4 production. However, the effectiveness of fat supplementation to reduce CH4 emissions may vary with the type of forage fed. Additionally, these reductions may be counterbalanced by increased CH4 emission from manure management. Two experiments were conducted to investigate the effects of linseed oil supplementation on dairy cows fed red clover silage or corn silage based diets. The objectives were to examine: 1) gut CH4 production, digestion, ruminal fermentation, nitrogen excretion, milk production, and milk composition; and 2) CH4 emissions of stored manure.

Twelve lactating Holstein dairy cows fitted with rumen cannulas were used in this study. They were fed a TMR ad libitum (60:40 forage:concentrate ration on a dry matter basis) based on either red clover silage or corn silage and supplemented or not with 4% linseed oil. This resulted in a total of four dietary treatments throughout the study. The amount (4%) of linseed oil added to the diet was based on current recommendations of a maximum supplementation level of 4% added fat to avoid reduction in feed intake and negative consequences on milk performance. Cows were milked twice daily with milk production recorded at each milking and samples collected. Researchers measured feed intake, rumen fermentation characteristics, digestibility, and nitrogen balance. Methane emissions were determined using 2 airflow-controlled chambers. All manure and urine was collected from the cows, mixed, and monitored for methane emissions.

When linseed oil was added to the red clover silagebased diet the DMI did not change, digestibility increased, milk yield, milk fat and milk protein were unaffected and CH4 production decreased by 9% in grams/day.

In the second experiment, there was no significant difference in the amount of volatile solids (VS; 6.6 kg/d) excreted by the animals. Manure from cows fed corn silage produced 54% more CH4 per kg of VS than manure from cows fed red clover silage.

What does it mean?

The challenge with using fat to decrease CH4 production is to lower emissions without impairing animal production. Milk yield was not affected by linseed oil supplementation regardless of the silage type used, but because of decreases in milk fat and milk protein yields, milk production (as measured by 4% fat-corrected milk and energy-corrected milk yields) could be considered decreased with linseed oil supplementation to the corn silage-based diet.

These results suggest that the gain achieved through dietary gut CH4 mitigation may be offset by an increase of CH4 emissions from stored manure.