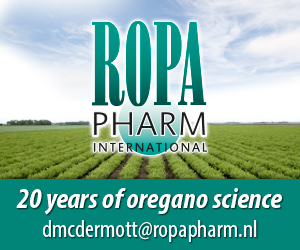 When you think of oregano, what comes to mind? For most, oregano is thought to be a popular all-natu- ral spice used in a variety of dishes for human consumption. But thanks to the innovations by leading Dutch investment banker, Paul Mensink, oregano oil has proven to be active component of natural animal feed supplements—leading many dairy farmers and ranchers to turn to RopaPharm International, Mensink’s leading animal feed supplement company—to meet their animals’ dietary needs and improve the health of livestock.

It was over 22 years ago that Mensink founded RopaPharm, an innovative Dutch company that develops, produces, and sells animal feed supplements based on fully natural oregano essential oils. In the mid-1990s, two German veter- inarians sought to test Mensink’s natural oregano in the field of pigeon racing. The results? Exceptionally healthy pigeons. This further led Mensink to establish a 400-acre oregano farm in Turkey where he began providing oregano to the Chinese pigeon market in 1997. Fast forward 20 years, and today, RopaPharm provides animal feed supplements, additives and f lavor- ings using oregano-oil as the active component to livestock producers worldwide who recognize the pow- erful impact oregano has on animal health. Motivated by the notion that both humans and animals should live a healthier lifestyle, Mensink and the team of nutritionists, tech- nical consultants, and veterinarians at RopaPharm continue to produce a range of oregano products that are proving extremely beneficial to livestock.

So how are oregano oils extract- ed from plants for use in animal feed supplements? After cultivating the carefully selected plants, the oregano essential oil is obtained via steam distillation. By its own planta- tion areas and distillation facilities, RopaPharm provides sustainable quality of raw materials and controls the amount of active components in oregano essential oil from which the company’s feed additives are manu- factured. Using a unique formula that is high in antioxidants, RopaPharm’s products work to feed the animals defenses against bacteria, fungi and parasites while reducing or even eliminating the use of artificial sub- stances in animal feed supplements.

“RopaPharm products are unique in the fact that, based on research, the ideal ratios for the primary active ingredients, which cause symbiotic responses, are being identified and put into product improvement years ahead of the competition,” says Dan L. McDermott, CEO of RopaPharm U.S. Llc

Here’s why: Essential oils, such as oregano oil, are the secondary metabolites of plant materials that are obtained by distillation. These oily liquids consist of several chem- ical components, and while they are generally in liquid form, they are con- sidered volatile because of the easy evaporation properties. These vol- atile components provide the plant with vital properties.

Specifically, oregano oil, which is obtained from hybridized origa- num onites, consists of >62-68% carvacrol, 1-3% thymol and <8% p-cymene. It’s the large percentage of carvacrol in oregano oil that is resulting in the plant’s increased role in animal digestive health.

In fact, the USDA Agricultural Research Service (ARS) has identi- fied oregano essential oil—because of its large percentage of carvacrol—as having some important properties including immune modulation, antibacterial, anti-inflammatory, antiparasitic, enzyme stimulation, and antifungal. A Canadian patent was issued to Ropapharm International in 2012 based on the anti-inflammatory mode of action. Oregano oil also is the most known and used essential oil because of its strong antibacterial properties.

“There are many herbs that do one or two of these modes of action well, but none have the entire balance of effective modes as does correct- ly ratioed oregano essential oil,” McDermott says.

The company’s signature product line for pigs, poultry and ruminants is called Ropadiar, which is an orega- no-based natural feed additive used to improve general health, milk yield and reduce the somatic cell (SCC) score for dairy cows. Within the dairy industry, Ropadair oregano products are currently being used in the man- ufacturing of calf milk replacers and specialty nutrition products. It is also added to milk on the farm, used in all phases of rations and mixed with free choice minerals.

As McDermott explains, due to the active components of oregano oil, using Ropadair as a feed addi- tive effects dairy cows intake due to the flavor, as well as improves the antibacterial, anti-parasitic, anti-ox- idative, fungicidal, enzyme and immune modulation. Ropadair also eliminates pathogens in an animal’s digestive system and can provide pro- tection during incidents of diarrhea by increasing the nutrient absorp- tion by protecting intestinal villis. Ropadair provides measurable yield increase, and improves herd health by increasing immunity.

Using Ropadair as a feed additive not only has proven to increase milk yield, reduce the SCC score, and grow nursery calves significantly faster, but the product also improves the general health and provides extra protection during stressful times that animals may experience. In addition, the fun- gicidal and anti-oxidative properties that are consider active compounds of oregano oil help to improve feed stability, quality and protect the feed material during storage.

The use of oregano in dairy feeding has attracted the attention of researchers. For instance, a study designed for 170 milking cows in South Korea was performed to illus- trate the effects of Ropadair on the dairy animals’ SCC score. Ropadair was given daily with an amount of 1 gr to 1kg of compound feed. The dairy cows were divided by their SCC score into three groups. One group consisted of cows with an SCC score lower than 200; the second group had scores ranging between 200 and 400; and the third group had SCC scores higher than 400. After 14 weeks of being fed Ropadair, the SCC scores for animals with original scores higher than 400, were drastically reduced.

In an additional study designed for the Feed Innovation Service in the Netherlands, researchers wanted to see the in vitro effects of Ropadair on rumen volatile fatty acids and the reduction of methane. Three groups of animals were involved in the study: a control group; a group that was given a high dosage of Ropadair; and a group that received a low dosage of Ropadair. Both groups of animals receiving Ropadair in low and high dosages experienced a decrease in total volatile fatty acids, acetic acids, propionic acids, and methane. Resulting in significantly high milk production. McDermott comments “it makes sense that the methane reduc- tion observed is directly related to increased energy for lactation being used, resulting in the significant increase of lbs. of milk per day”

“The future of solidly researched natural products is growing rapidly as science learns more about why these traditional herbs improve health and production,” McDermott says. “If you look at the economics of using RopaPharm oregano in your herds it really becomes the question of, ‘Who can afford not to improve productivi- ty with this product?’”