Antimicrobial stewardship is a public health concern that calls for the judicious use of antimicrobials in veterinary medicine. The FDA has prohibited certain extralabel uses of cephalosporin and fluoroquinolones drugs in the veterinary field to preserve theseantimicrobials for use in human medicine1. Nowadays, the dairy industry is highly scrutinized due to usage of antimicrobial drugs in dairy cows for preventive or therapeutic purposes because consumers associate these practices with increasing antimicrobial resistance (AMR)2.

What is the difference between antibiotic and antimicrobial?

An antibiotic is a chemical substance, such us penicillin or streptomycin, produced by a microorganism (e.g., fungi) that at a low concentration inhibits or kills other microorganisms. An antimicrobial is any substance of natural, semisynthetic, or synthetic origin that kills or inhibits the growth of microorganisms but causes little or no damage to the host. Thus, an antibiotic fall under the antimicrobial category.

Mastitis is the most frequently diagnosed and treated disease in dairy cows. Mastitis is the inflammation of the mammary gland commonly caused by bacteria and is classified as subclinical or clinical based on the absence or presence of clinical signs (abnormal milk, inflamed udder sometimes accompanied by fever), respectively. Overall, pathogens found in the environment surrounding cows are the most common cause of mastitis—one of them is Klebsiella3. 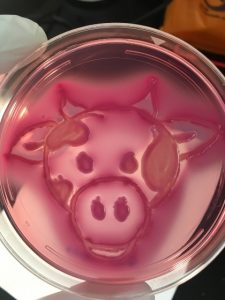 Klebsiella are Gram-negative bacteria. They are one of the most frequent causes of intramammary infections3; mainly causing clinical mastitis.

The most isolated Klebsiella species from cases of clinical mastitis are: Klebsiella pneumoniae and Klebsiella oxytoca. Both species are frequently found in the farm environment, body sites of cow, and swabs taken from teat-end5,6,7.

Why is Klebsiella, a mastitis-causing pathogen, important to human health?

In humans, Klebsiella causes one-third of opportunistic Gram-negative infections, including wound, urinary tract, and hospital-acquired (i.e., newly acquired infections that are contrated within a hospital environment) infections8. Klebsiella pneumoniae is commonly associated with community-acquired infections9 such as liver abscess, meningitis, or endophthalmitis10.

Because this pathogen is very prevalent among humans, it is possible that human Klebsiella could acquired AMR genes from the environment11-12, which might make this bacterium not susceptible to the current antimicrobials available for treating those infections.

Due to the usage of antimicrobial for treating dairy cows, it has been hypothesized that bacteria at the farm setting can acquired AMR and pose a great risk to people2. However, there is no conclusive data to prove that hypothesis. So far, we can say that there is no increase of AMR in mastitis-causing pathogens on dairy farms13-16. Surveillance is a key factor to determine whether AMR is increasing in mastitis-causing pathogens.

Recently, we summarized AMR trends in Klebsiella isolates cultured from milk samples submitted to the Wisconsin Veterinary Diagnostic Laboratory (WVDL) for bovine mastitis testing between 2008 and 2019. They tested 483 Klebsiella isolates cultured from 63,841 milk samples and ten antimicrobials were tested: ampicillin, penicillin, erythromycin, oxacillin + 2% NaCl, pirlimycin, penicillin/novobiocin, tetracycline, cephalothin, ceftiofur, and sulphadimethoxine. Most of these antimicrobial compounds are currently used in products intended for preventive and therapeutic care of dairy cattle.

Klebsiella have innate mechanisms to resist the antimicrobial effect of ampicillin, penicillin, erythromycin, oxacillin + 2% NaCl, pirlimycin, penicillin/novobiocin action, thus, AMR was more than 90% for all these antimicrobials for 2008-2019.

We found that ceftiofur AMR varied through 2008 and 2019 and increased between 2016 and 2017 (Figure 2). We could not explain why AMR increased but we hypothesized that it might be associated with ceftiofur formulations being commonly used for treatment or prevention of intramammary infections in dairy cows. 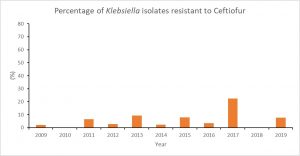 For sulphadimethoxine, we found that resistance decreased through 2008 and 2019 (Figure 3). This result might reflect that farmers follow label specification and use sulphadimethoxine only for dairy calves, heifers, and beef cattle. 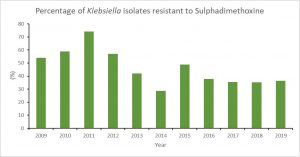 Except for ceftiofur, we did not find increasing AMR trends among Klebsiella isolates cultured from milk samples submitted to the WVDL for bovine mastitis testing.

Antimicrobial resistance is an important issue on dairy operations. People in our communities expect farmers to decrease use of antimicrobial on dairy farms. Although, there is not conclusive data about the relationships between AMR development in animal pathogens, the farm environment, and human health, we need to provide adequate safety measures to reduce the likelhood of AMR. Particularly, dairies could introduce procedures for staff who work closely with cattle—dairy workers—to decrease any chance of transmission of animal pathogens carrying AMR genes to those workers.

Nutrition solution can help heat-stressed cows as US warms