Why this research is important:

The Canadian dairy industry has been investing in the collection of many economically important novel phenotypes through the national health-recording system and various research projects. These traits include mastitis, metabolic diseases, fertility disorders, hoof health, feed efficiency and methane emissions, some of which currently have genetic evaluations available or in the future will. The introduction of genomic selection in 2009 in Canada has helped achieve significant increases in genetic gain for production, conformation, longevity and fertility traits with the backing of a large reference bull population. However, genomic selection is still limited for disease and other novel traits by a much smaller group of reference animals, as collected data is still minimal. Increasing the size of the reference population using females that are genotyped and have phenotypes for traits of interest can help increase the accuracy of genomic predictions for important novel traits.

It has been estimated that genomic selection for novel economically important traits could generate an additional $200 million per year in annual net benefits to the dairy sector due to increased genetic progress for new relevant traits1 . The inclusion of novel traits with more accurate genomic evaluations in Canadian dairy breeding programs will support profitability by improving animal health and welfare, and production efficiency in Canadian dairy herds

• Advance the understanding of the genetic control of novel traits and the potential role of additional “-omics” data, which can be used to characterize groups of biological molecules that translate into structure, function and biological systems within an organism, in Canadian dairy cattle breeding programs.

It has been demonstrated in previous research that the accuracy of genomic evaluations for novel traits can be improved by increasing the size of the reference population in a cost-effective manner by genotyping cows that already have phenotypes for novel traits.

This project aims to genotype 30,000 cows from selected commercial herds that are collecting relevant phenotypes to augment the size and diversity of the current reference population used in genomic selection. The enlarged reference population will be used by the researchers to determine genetic parameters, develop or improve genomic evaluations, and deliver more accurate genomic predictions for a series of novel traits. The researchers will also perform association studies, functional analyses, and fine mapping to identify regions of the genome or genes and associated biological pathways related to the novel traits. With these results, investigations will determine if “-omics” data can add benefit to genomic evaluations and breeding programs.

The construction of an enlarged female reference population composed of genotyped cows from herds recording novel traits of interest to support and increase the accuracy of routine genomic evaluations for a portfolio of traits, accelerating genomic gains and leading to the breeding of more disease resistant and efficient animals. 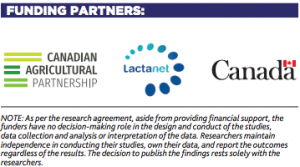