2019 will mark Canada’s 10th anniversary of the introduction of official genomic evaluations. When they were first introduced by Canadian Dairy Network (CDN) in August 2009 for Holsteins, there was much hesitation and questioning about whether the technology was real and useful or just hype. Today, we know the truth and, as a consequence, breeds with genomic evaluations have rapidly increased the rate of genetic progress for essentially all traits.

Basically, genomic selection added another source of data to the genetic evaluation systems at CDN.  In addition to performance data and pedigree information, DNA became a new source of data for each genotyped animal.  To improve the understanding of how this new source of data was being used to produce published genomic evaluations, CDN decided to make Direct Genomic Values (DGV) public.  In recent months, there has been much discussion about the intent of CDN to no longer publish DGV. The strong interest and passion of Canadian breeders was clearly heard. For this reason, the CDN Board decided to delay the implementation of the GEB recommendation to be effective December 2019. Let’s take a closer look at why CDN will be moving forward with this direction.

What is Genomic Parent Average (GPA)?

For genotyped animals, there are three main sources of information that contribute to its official genomic evaluation.  These include the animal’s Parent Average (PA), any performance data (i.e.: such as lactation, classification, mastitis, fertility, etc. data) recorded on the animal and/or its progeny, and the DGV estimated from the animal’s DNA.  For young bulls and heifers, since no performance data exists, they receive a Genomic Parent Average (GPA), which combines its PA and its DGV into the single official genomic evaluation published by CDN, as shown in Figure 1. 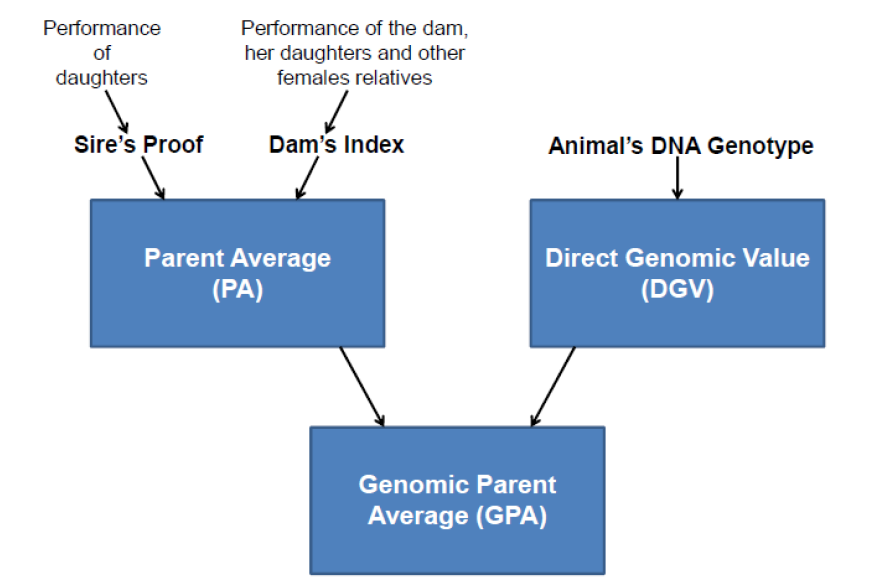 Since PA is simply the average of the evaluations for the animal’s sire and dam, the range for PA can never be wider than it is for evaluations of bulls and cows old enough to be parents.  Looking at Conformation as an example, the highest active sire in A.I. currently has a rating of +20, while the highest proven sire is +16 and the highest breeding age female born in Canada is +18.  This means that it is impossible for Canadian-bred animals to have a PA higher than +19. Looking at DGV for Conformation, however, the highest bulls are at +22.  This higher scale for DGV attracts extra attention to these values for marketing purposes. However due to their different scales, DGV cannot be directly compared to GPA values.  Further, since GPA results from a blending of PA and DGV, the most elite animals of the breed will almost always have a DGV higher than GPA.

Even though the scales for GPA and DGV are not exactly the same, the rankings for top animals of greatest interest for selection are essentially identical. In fact, regardless of the trait looked at (i.e.: LPI, Pro$, Conformation, etc.), over 90% of the highest genomic bulls would be the same if ranked by GPA versus DGV.  In this sense, DGV does not help identify the most elite animals for selection and mating compared to using GPA alone.

In discussion with some breeders, there was the impression that DGV helped to better identify those genomic young bulls that would end up with the highest proofs once their progeny were milk recorded and type classified. This was the basis for the initial analysis conducted by CDN geneticists earlier this year.  The most appropriate way to assess this question is to look at sires that currently have an official progeny proof and see whether their GPA or DGV four years ago, when they were a genomic young sire in A.I., best predicted their current results.  The results of the analysis were clear. While GPA is not a perfect predictor of a young bull’s future progeny proof, using DGV was consistently a poorer predictor.  This can be explained by the fact that DGVs tend to be higher than GPA for elite genomic young bulls so a higher degree of over prediction is expected compared to GPA.

The same question can also be asked for females.  Does DGV for genotyped heifers provide a better prediction than GPA of their future performance as a lactating cow in the herd? CDN conducted a specific analysis to examine this question within several herds.  In the end, there was no practical difference in the correlation between GPA or DGV for heifers with their resulting 305-day lactation yields and classification scores during first lactation.

Looking at the Difference of DGV Versus GPA

Figure 2: Comparison of Average LPI Values for Two Groups of Genomic Bulls Among Top 100 for GPA LPI Based on the Degree of Difference Between DGV and GPA 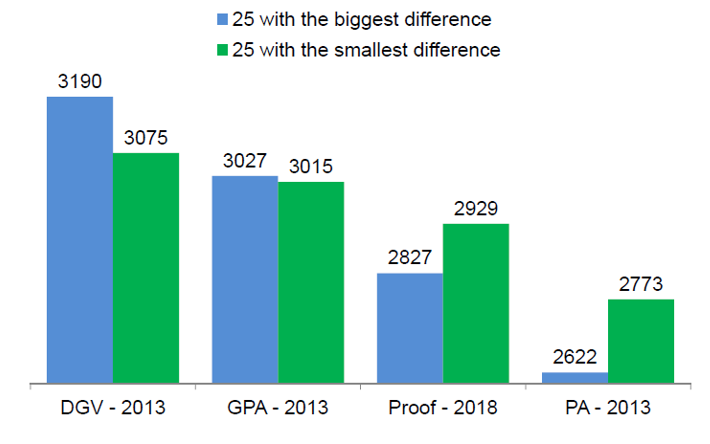 Breeding for the Next Generation of Extreme Animals

Breeders aiming to produce young bulls for potential entry into A.I. and/or elite females for marketing and embryo sales tend to have navigated to using DGV as an important sire selection tool. The goal from this strategy is to use genomic bulls with the highest DGV for any given trait to increase the chance of producing progeny that also have an extreme DGV in the breed. CDN recently designed and conducted an analysis to assess this strategy compared to using GPA for achieving the same objective.  The conclusion from this study was that DGV was not superior to GPA in terms of identifying extreme genomic sires that will have higher chances of producing extreme progeny.

Based on all scientific analysis conducted, no evidence has been found to show that DGV provides any information for improved sire selection and/or mating decisions, compared to using the official GPA itself. Based on these results, the Genetic Evaluation Board (GEB) of CDN approved a recommendation to no longer publish DGV in the future.  In terms of implementation of this recommendation, the CDN Board of Directors decided to delay it until December 2019.  In the meantime, CDN will work with the various breed associations and A.I. organizations to prepare and deliver an industry-wide communication plan related to this direction.