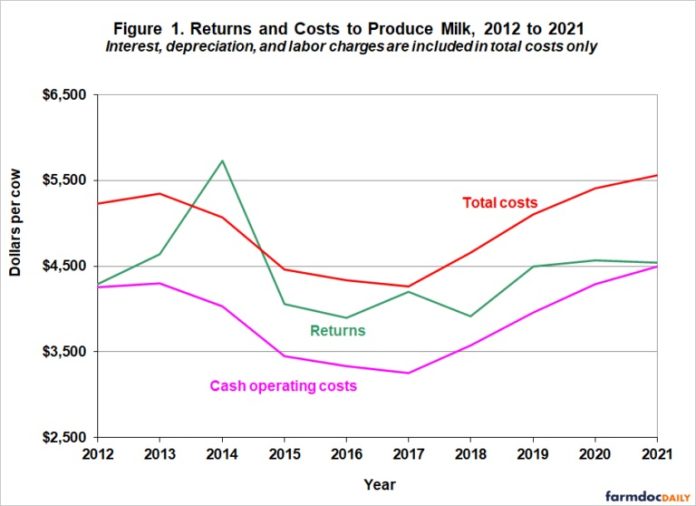 by Bradley Zwilling, Illinois FBFM Association and Department of Agricultural and Consumer Economics, University of Illinois

Total returns from milk per cow decreased slightly from 2020. The net returns per cow in 2021 were a negative $1,021. Total returns have exceeded total economic costs only once out of the last ten years.

The last five-year returns above all costs have averaged a negative $654 per cow. During this period, returns above all costs per cow have varied from negative $60 in 2017 to negative $1,021 in 2021. In Figure 1, labor and interest charges are included in total costs only. Most dairy producers will incur hired labor and cash interest expense and would include them as cash operating costs.

However, 2023 is projected to have lower milk prices and slightly lower feed costs leading to a small projected negative economic return in 2023. The average milk price for 2022 is projected to be about 39 percent more or about $7.40 per hundredweight higher than the average for 2021. Higher milk production and continued uncertainties in the world will be offset by much higher exports and more demand leading to much higher prices in 2022.

While milk prices increase for 2022, feed costs for 2022 are expected to increase due to higher corn and soybean prices. Feed costs per 100 pounds of milk produced are projected to average about $14.50 using prices of $6.73 per bushel for corn, 25 cents a pound for protein and $190 per ton for hay.

This is based on annual feed consumption per cow, including replacement animals, of 93 bushels of corn, 5,059 pounds of protein, and 9.1 tons of hay or hay equivalents. If nonfeed costs per 100 pounds of milk produced averaged $10, total costs to produce 100 pounds of milk would be $24.50. A 39 percent increase in milk prices in 2022 for Illinois producers would result in an annual price of about $25.35 per 100 pounds.

The author would like to acknowledge that data used in this study comes from farms across the State of Illinois enrolled in Illinois Farm Business Farm Management (FBFM) Association. Without their cooperation, information as comprehensive and accurate as this would not be available for educational purposes. FBFM, which consists of 5,000 plus farmers and 70 professional field staff, is a not-for-profit organization available to all farm operators in Illinois. FBFM field staff provide on-farm counsel with recordkeeping, farm financial management, business entity planning and income tax management. For more information, please contact the State Headquarters located at the University of Illinois Department of Agricultural and Consumer Economics at 217-333-8346 or visit the FBFM website at www.fbfm.org.