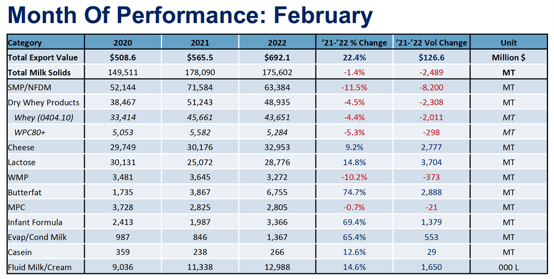 Reduced Chinese demand continues to dampen U.S. whey exports, but overall volume in February finished better than expected, slipping only 4.5% (-2,308 MT). There were some encouraging signs in whey in February, including a 14% increase in modified whey shipments and a much stronger buying presence by Japan in the WPI sector. In February, U.S. WPI exports declined 5%, primarily due to a 67% drop in WPI shipments to China (-1,498 MT). Japan, however, increased WPI purchases from the U.S. by 164% (+1,010 MT).

For a recap of cheese performance and a look at Mexico, read on.

Global cheese demand remains strong, and tight supply and favorable pricing continue to benefit U.S. suppliers. Much of the U.S. cheese growth in February came from a 59% increase in cheddar volume, which is being primarily driven by competitive pricing, available supply and good demand.

Conflicting factors are buffeting demand for dairy imports. On the one hand, Mexican milk production has been stumbling. Despite official statistics stating production has been consistently up around 2% over the last year, we hear that many processing facilities are struggling to run at full capacity, with some running as much as 40% below capacity.

While the government remains optimistic about milk production in 2022, Mexico’s leading dairy trade association, Femeleche, has pushed back against the official statistics and expects production to be down by 3.3% this year. This tighter domestic environment for milk is supportive of U.S. imports into the country, and it is likely to continue in 2022. However, a strong dollar could still temper demand.

While the peso has strengthened against the U.S. dollar in the last few weeks, it’s still near some of the weakest levels it’s been against the dollar in years. A peso that doesn’t stretch quite as far as it used to stretch may challenge U.S. exports.

In addition to the challenging currency environment, prices are also likely testing Mexican buyers’ willingness to pay, especially for NFDM. NFDM prices are roughly 34% higher today than they were six months ago and 55% higher than they were a year ago. Despite the tighter domestic milk environment in Mexico, these higher prices may be pushing buyers to limit their purchases, buy only what they need in the near term, and push off heavier volumes in the hopes that prices will come down.

2023 Outlook for the farm equipment market