When they say she has her father’s fat and protein, that’s a compliment to her dairy bull sire. Certain traits, like high fat content, can influence how much milk revenue a daughter produces in her lifetime.

USDA’s Economic Research Service and Cornell University researchers used 2017 trait data from a dataset of more than 400 Holstein bulls to estimate the technical, revenue, allocative, and profit efficiency of each bull relative to its peers. Some bulls excel in some traits, but not in others.

The traits that dairy bulls might pass on to their daughters are typically evaluated using genomic testing and progeny, or offspring, data. Multiple efficiency measures are used because they each focus on a different benchmark:

Since dairy farmers are paid based upon the pounds of protein and the pounds of fat that a cow produces in her milk, the base analysis focused on two traits: the quantity of protein and the quantity of fat. Results show that two bulls out of the more than 400 in the database are tied for most technically efficient, with one bull’s trait producing more protein and the other bull producing more fat. All other bulls transmitted traits producing lower quantities of protein and fat and are categorized as inefficient. Although allocative efficiency has a high average score of 0.99 across all bulls, a single bull is allocative efficient—and that same bull is also the only profit and revenue-efficient bull.

Researchers then calculated efficiency scores using a larger set of traits, including pounds of protein, pounds of fat, somatic cell count, livability (trait to determine which cows are less likely to die on the farm), udder composition, daughter pregnancy rate, and calving ability. The distribution of efficiencies across bulls is shown in the figure below. Results show that almost all the bulls are technically efficient under the broader trait review. However, the average measure of allocative efficiency—producing the correct proportion of traits—decreased somewhat. This is because the additional traits included in the measure all affect efficiency differently, making it less likely a bull will produce the best across the board.

Bulls are generally highly technically efficient but many are producing the wrong traits, given the values of those traits. Other than fat and protein, most bulls are not producing the correct proportion of genetic outputs given trait values. Thus, in general, most bulls are highly technically efficient but only a few are allocative, profit efficient, and revenue efficient. When examining profit efficiency only using protein and butterfat and holding their output prices constant, over half of the bulls need at least a 50-percent reduction in semen price in order to become profit efficient. Since the study ended in 2017 and new bulls are added continuously to the list of available bulls, the computed efficiencies can change when new bull lists are released. 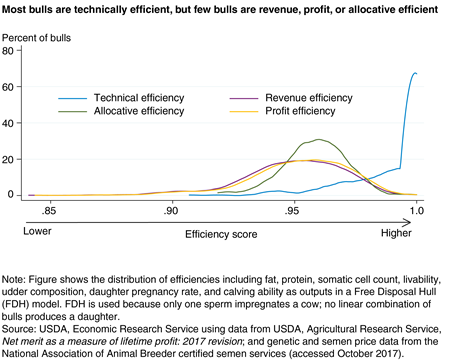