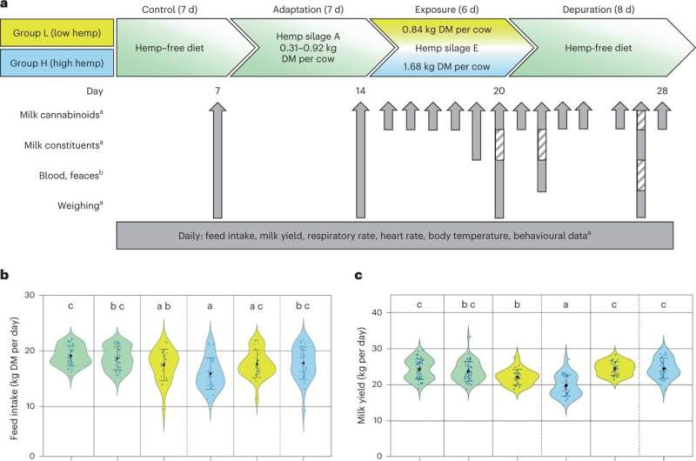 Commercial hemp is currently experiencing a revival due to its many applications. Commercial hemp varieties contain only small amounts of psychoactive (intoxicating) cannabinoids, which include Δ9-tetrahydrocannabinol (Δ9-THC). A team of researchers led by the German Federal Institute for Risk Assessment (BfR) has now investigated the consequences of feeding hemp silage to dairy cows. Silage is animal feed preserved by fermentation.

The results of the study, published in the journal Nature Food, is that if the hemp silage contained a comparatively high concentration of cannabinoids, the animals’ behavior changed and their health was impaired. Breathing and heartbeat slowed down. The cows became sleepy, unsteady, ate less and gave less milk.

“Our study also shows that even a small addition of hemp silage to the daily ration of dairy cows leads to the detection of cannabinoids in the milk, including Δ9-THC,” says BfR feed expert Dr. Robert Pieper, one of the study authors. “The impairments in animal health are apparently due to the cannabinoid concentration in the silage, which in turn depends on many factors.”

The beginnings of the study go back more than ten years. At that time, there were indications in the EU that cannabinoids contained in commercial hemp fed to cows could pass into cow’s milk, but no reliable data were available. In order to close the knowledge gaps, the BfR began relevant investigations in 2016.

The study now published was carried out on ten dairy cows. The cannabinoid content in milk, blood plasma and feces was measured. In addition, body functions such as the heart rate and respiration were followed and the behavior of the animals was observed.

The content of psychoactive Δ9-THC in this silage was approx. 0.12 %, which was still below the maximum permissible content for commercial hemp of 0.2 %. Thereupon, the behavior of the animals changed significantly. From the second day on, the cows ate less and gave less milk. The respiratory rate and the heart rate decreased. There was also increased salivation, tongue play and reddening of the nictitating membrane of the eye.

Shortly after the start of feeding with commercial hemp, it was possible to detect Δ9-THC and other cannabinoids in milk in amounts considered relevant to consumers health. Consumption of milk and milk products with a Δ9-THC content of this magnitude can lead to a significant exceedance of the acute reference dose (ARfD) of 0.001 milligrams THC per kilogram body weight for humans. The exceedance would be particularly pronounced for children. The ARfD stands for the estimated maximum amount of THC that can be ingested in the course of one day without an appreciable health risk.

The scientific study was designed to answer the question of how much is transferred into cow’s milk when commercial hemp is fed. A high Δ9-THC content in cow’s milk is not to be expected in Germany due to the legal framework conditions according to the current state of knowledge.