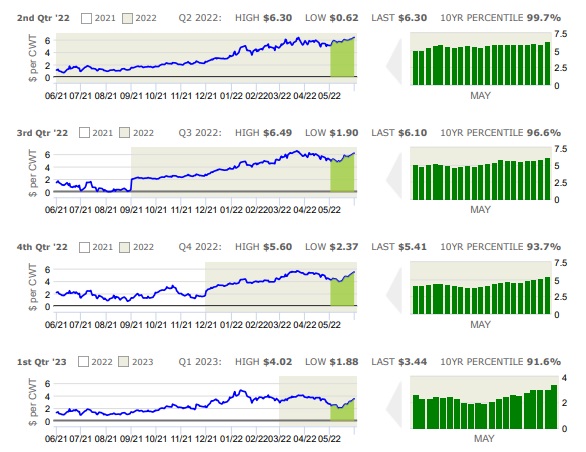 Dairy margins improved over the second half of May, particularly in deferred production periods as a combination of higher milk prices and lower feed costs increased forward profitability. Milk futures prices were supported by both the monthly Milk Production and Cold Storage reports. USDA reported April Milk Production at 19.15 billion pounds, down 1% from last year and also the sixth consecutive monthly decline from year ago comparisons – tying the 2003-2009 period for the longest streak of contracting production since 2001. The U.S. dairy herd at 9.402 million head was unchanged from March although USDA revised The March figure higher from last month by 7,000 head. The total dairy herd is down 98,000 head from last year, with milk per cow output at 2,037 pounds unchanged from 2021. Most of the 24 major dairy states reported lower milk production in April compared to last year as high feed costs, scarce heifers and regional supply management programs discourage expansion and complement a trend of declining global milk output. Class IV Milk and spot butter markets found support in the last half of May as USDA reported butter inventories in Cold Storage down 22% from last year at 299.6 million pounds. Strong spring holiday sales and increased export demand likely drew down inventories according to Dairy Market News, with cream supplies tight in northeastern states during April. All natural cheese stocks in Cold Storage totaled 1.48 billion pounds at the end of April, up 2% from last year and a record high for April cheese inventories. Like butter though, the monthly build in cheese stocks from March to April was only half the most recent five-year average. Our clients are continuing to add margin coverage in deferred marketing periods with flexible strategies in both milk and feed.

The Dairy Margin calculation assumes, using a feed price correlation model, that for a typical dairy 62.4 lbs of corn (or equivalent) and 7.34 lbs of meal (or equivalent) are required to produce 100 lbs of milk (includes dry cows, excludes heifers not yet fresh). Additional assumed costs include $0.90/cwt for other, non-correlating feeds, $1.65/cwt for corn and meal basis, and $8.00/cwt for non-feed expenses. Milk basis is $0.75/cwt and non-milk revenue is $1.00/cwt.

Livestock, Dairy, and Poultry Outlook: May 2022