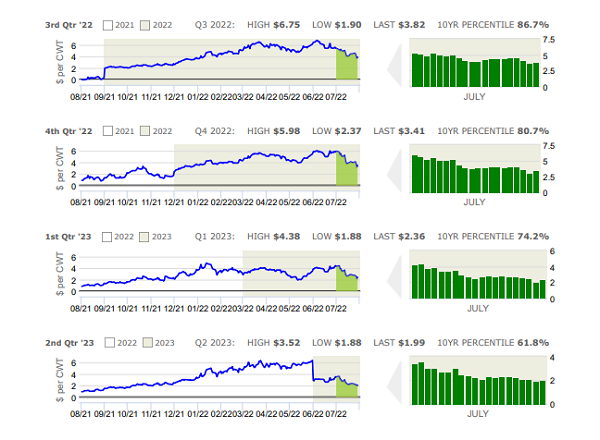 Dairy margins weakened slightly over the second half of July as milk prices were largely flat while projected feed costs rose a bit. USDA reported June Milk Production at 18.975 billion pounds, up 0.17% from 2021 and the first year-over-year increase in monthly milk production since October 2021. The U.S. dairy herd at 9.423 million head increased a modest 4,000 cows from May but was 78,000 lower than the prior year. June represented the ninth consecutive month of lower year-over-year milking cow inventories, although the pace of decline has slowed and May’s dairy herd was revised upward by 14,000 cows. The U.S. milking herd has now added a total of 50,000 cows since the beginning of the year. Productivity increased with milk per cow reported at 2,014 lbs., up 1% from June 2021 and the fastest pace of growth since then. USDA also reported monthly Cold Storage, with total cheese stocks of 1.51 billion pounds, down 6.8 million pounds from May compared to the
typical average decline of around 11 million pounds. American cheese inventories dropped 10.2 million pounds during June but were still recordhigh for the month and up 4.7% from a year ago. Non-American cheese stocks were a record 635 million pounds, up 5.1% from last year. Butter inventories of 331.8 million pounds were up 10.2 million pounds from May but still 20% lower than last year and down 8.5% from 2020. The feed markets were relatively quiet although corn has caught a bid recently with updated near-term weather forecasts suggesting above-normal temperatures with below-normal precipitation across the Corn Belt as 68% of the U.S. remains under some degree of drought. Our clients
continue to evaluate strategic adjustments on existing positions to add upside flexibility and secure input costs. 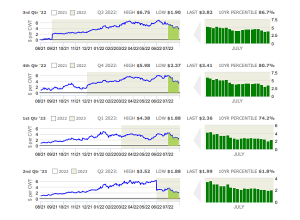 The Dairy Margin calculation assumes, using a feed price correlation model, that for a typical dairy 62.4 lbs of corn (or equivalent) and 7.34 lbs of meal (or equivalent) are required to produce 100 lbs of milk (includes dry cows, excludes heifers not yet fresh). Additional assumed costs include $0.90/cwt for other, non-correlating feeds, $1.65/cwt for corn and meal basis, and $8.00/cwt for non-feed expenses. Milk basis is $0.75/cwt and non-milk revenue is $1.00/cwt.