Dairy calves are often reared individually early in their life, contrary to natural conditions, where calves have access to a richer social environment. A large body of research suggests that housing dairy calves in pairs or groups early in life is important for the development of their social and cognitive skills. Studies also suggest that older calves are motivated to access a conspecific of similar age, but little is known about the social motivation of younger dairy calves.

A recent study1 from The University of British Columbia Animal Welfare Program investigated how motivated young dairy calves are to access a conspecific using weighed push-gates. Researchers used a total of 20 bull calves (10 subjects and 10 ‘rewards’) of approximately 5 days of age at the start of the study. Calves were housed for 15 days in a pen with two identical push-gates (Figure 1) that provided the calf with access to two pens: one empty (the control) and one containing another calf (the ‘reward’). After each successful push, the weight of the push-gate was increased at the next feeding (8 AM or 4 PM). The pen with a social partner was randomised after each push.

Weighted push-gates have been successfully used by researchers at the UBC Animal Welfare Program for evaluating cow’s motivations to access a mechanical brush and for access to pasture, but this paradigm is novel for testing motivation in young calves, and did not require time consuming training.

Researchers found that calves pushed more weight to access a pen that contained another calf as compared to an empty pen, suggesting that dairy calves are socially motivated. Out of the ten calves tested, nine pushed more weight to access a social partner. One calf was very motivated and pushed twice the weight for their partner (7.5 kg) that any other calf pushed. Calves learned to use the pushgates quickly without training, making this a promising new method for testing the motivation in dairy calves.

The findings from this study suggest that dairy calves are motivated to access a social partner, even at a very young age. These findings contributing to a growing body of research supporting the housing of dairy calves in pairs or groups. 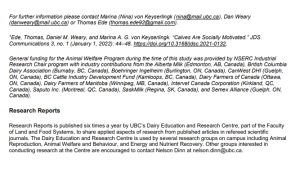