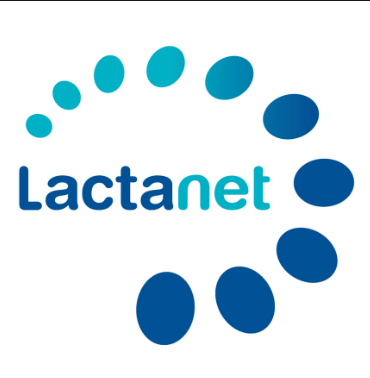 Today, essentially every bull with semen available to Ayrshire breeders was pre-selected by the A.I. organization based on genomic testing and has an official genomic evaluation published by Lactanet.  In this way, there has been full adoption of genomic testing among Ayrshire bulls and every Ayrshire herd is benefiting from some benefits of genomic selection.

The first outcome of genotyping any animal is a guaranteed confirmation of any recorded parentage for any parent that has also been genotyped.  In the event that a parentage conflict is identified, Lactanet’s processes are able to discover each animal’s correct sire. Given the high frequency of bull genotyping, this essentially gives 100% certainty of each heifer’s sire.  In herds that routinely genotype their females, then when they become dams of future genotyped heifers the full parentage will be confirmed or discovered with certainty.  Herdbook integrity is important for Ayrshire Canada but it is also important for your herd and the accuracy of genetic information used for management decisions.

There are multiple genetic abnormalities known to exist in the Canadian Ayrshire population.  The most recent example was the discovery of the AM gene associated with the Curly Calf Syndrome, which has an estimated frequency near 20%. The process of genomic testing identifies those animals that are expected to be a carrier of any known genetic abnormality.  For Ayrshire breeders, genomic testing of your females will clarify those that are carriers, which is important for making optimal sire mating decisions to eliminate the impact of any genetic abnormality in your herd.

The average Reliability level for an Ayrshire heifer’s Parent Average for LPI and Pro$ is 32%, which reflects its accuracy.  Once a heifer is genotyped this Reliability increases, on average, by 12 percentage points to become 44%. This accuracy level is almost as high as the 45% level that a milk-recorded, classified cow obtains in first lactation.  In other words, Ayrshire breeders that genomic test their heifers can make genetic selection and mating decisions that are nearly as accurate as if those heifers already had their first lactation performance data available.  An added bonus with genomic testing of heifers at a young age is that the contribution of their DNA to increase the accuracy of its genetic evaluations will also continue into adulthood as a producing cow.

The Canadian Ayrshire breed continues to make genetic progress for key traits of importance, as reflected by the LPI and Pro$ trends in Figure 1. These trends clearly show the faster rates of genetic gains achieved since the start of genomic selection in 2014. In fact, the rate of genetic progress for LPI and Pro$ has been 1.24 times faster during the past five years compared to rates achieved before genomics. The increased use of genomic testing of heifers and cows by Canadian Ayrshire breeders will augment this rate of breed improvement even further. 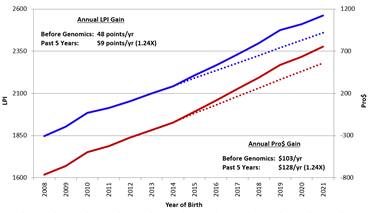 Canadian Ayrshire breeders can have a significant influence on how much gain in accuracy (i.e.: Reliability) can be achieved with genomics in the future. Increased Reliability gains translate to even more breed improvement for traits of importance. Table 1 shows the Reliability gain of 12 percentage points currently achieved for LPI and Pro$ in the Ayrshire breed. This gain is directly related to the size of the reference population of genotyped proven sires and cows used as the basis for genomic evaluation predictions. 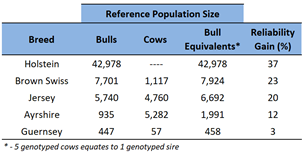 The benefits of genomic selection have been highly realized through the sire side of the genetic pathway.  Five important reasons why Ayrshire breeders should embrace and adopt genomic selection of their heifers and cows have been outlined. Some of these are most relevant at the herd level while others represent major opportunities for more accurate and faster rates of improvement for the Canadian Ayrshire breed.